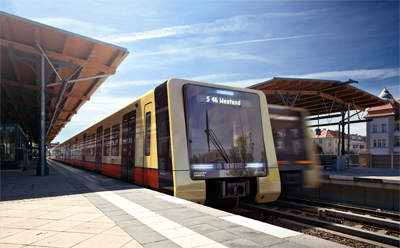 S-Bahn Berlin GmbH has signed a framework contract with the consortium of Stadler Pankow GmbH and Siemens for the delivery of up to 1,380 vehicles. A firm order was placed for the first 106 trains. The 85 four-section and 21 two-section trains have a high triple-digit million-euro order volume. S-Bahn Berlin, a subsidiary of Deutsche Bahn, plans to use the new trains on the Ringbahn lines (S 41 and S 42) as well as on the system's southeastern feeder lines S 47, S 46 and S 8. These lines comprise roughly one-third of the entire S-Bahn network in Berlin. The first ten vehicles will be ready to enter service as of 2020. Subsequently, all remaining vehicles will be delivered continuously to the Berlin system up to 2023. The vehicles will be manufactured and assembled at the Berlin plant operated by Stadler Pankow GmbH. Any publication must include a copyright notice Copyright: Stadler Pankow GmbH/design: büro+staubach berlin

The German states of Berlin and Brandenburg today signed a new transportation contract with S-Bahn Berlin for the future operation of the ring/south-east routes through to 2035.

As part of the signing, details regarding the vehicles' functionality, features and design concept were presented:

The external appearance will remain the same in terms of the color scheme. The front of the trains will have a modern design behind which, in the driver's cab, the one innovative change is that the screens will be integrated into the driver's console, giving the driver a better view of the track. The whole interior space will reflect the latest design models, based on functionality, comfort and ergonomics, and taking account of relevant standards and principles. The new end-to-end four-car units will allow for better distribution of passengers and provide additional seats in the new intercar passageways. Lockable connecting doors will ensure that, in the event of damage due to vandalism, the damaged car can be locked and the remaining cars can still be used. Wheelchair  spaces will for the first time now be located in close proximity to the driver.

The whole passenger compartment has been designed to be open and bright, with large windows that create a pleasant and safe atmosphere. Passenger compartment air conditioning is another new feature for vehicles on the Berlin S-Bahn. In view of the limited vehicle height, a special solution for integrating the necessary components was incorporated into the design. While part of the system will be accommodated in the vehicle's ceiling area above the seating groups, other elements of the air-conditioning system will be housed under the vehicle floor.

S-Bahn Berlin's passengers can look forward to a marked increase in riding comfort – among other things, thanks to the passenger information system. Flat-screen displays fitted to the side of each car will boast a high-resolution output to ensure that the content displayed is crystal clear.

The transportation authority will have considerable freedom of choice as it develops screen  content. While traveling on an S-Bahn train, passengers will then also be kept updated about their journey thanks to a clear route display graphic showing a series of dynamic lines representing stations and possible connections.

The new trains will use robust, tried-and-trusted components to guarantee reliability. The trains are designed to “tolerate the first fault”, meaning that their reserve capacity is sufficient to ensure continued reliable operation even if an individual component should fail. This approach is illustrated in the design of the power and drivetrain electrical systems: Each of the vehicle's individual cars has its own traction converter that drives three of each car's four wheelsets.

This means that the four-car half-train can tolerate a failure in one of its four traction converters without this significantly compromising the timetable. The half-train also has two auxiliary supply converters, so that in the event of one of the two systems failing, it is possible for the vehicle to continue operating, albeit with reduced comfort for passengers. Each individual converter in turn is composed of identical power components providing half power, to ensure there is still at least partial capacity in the event of a failure.

The design principles and technical realization of the power electronics also contribute to improved availability, as we have specially prepared these to withstand a hard winter. The power electronics in the new trains have been hermetically sealed off fro – keeping any snow and ice outside.

Components that inevitably have to be fitted to the “weather-exposed side” of the trains, such as fans, are arranged so that condensation is drawn away and cannot cause short circuits or other problems such as the freezing of moving parts. These are construction principles that have been employed on Siemens trains in Oslo (Norway) for years, ensuring sustainable, reliable operation in the city even in the face of snow and ice.

The vehicle control system used will also further optimize and protect the trains' availability in the long term. Here, Siemens' Sibas PN railway automation system guarantees long-term future-proofing and security of supply thanks to the use of general industry standards.

Deploying Sibas PN enables rapid Ethernet-based data communication and provides reserves for the transmission of even relatively large data volumes in the future: in other words, new IT applications that may not even exist yet can be integrated into the trains at a later stage without difficulty. This unprecedented depth of diagnosis offered by the IT-based system also allows the control system to centrally track and monitor the trains' functional performance.

Transmitting real-time vehicle data to the control center aids the identification and resolution of any malfunctions even before they impair the train's operation.

The integrated control of the drive and braking system using a single solution also makes an important contribution to the vehicles being reliable and cost-effective in operation. This provides for short signal chains and short control loops without time loss, allowing us to achieve highly effective regulation that permits electrodynamic braking until the vehicle is at a standstill. This braking concept is both resource-efficient and sustainable, as it results in virtually no wear. With the large number of braking processes involved in S-Bahn operations in particular, the advantages of this approach are especially clear as it helps to keep maintenance costs low.

S-Bahn Berlin GmbH has concluded a framework agreement with a consortium comprising Stadler Pankow GmbH and Siemens for the supply of up to 1380 cars, and a binding order has been placed for the first 106 trains. The order volume for the 85 four-car and 21 two-car vehicles will reach the high three-digit millions. S-Bahn Berlin, a subsidiary of Deutsche Bahn, plans to deploy the new vehicles on the ring line routes (S 41 and S 42) and on link routes S 47, S 46 and S 8 from the south east, which equates to around a third of Berlin's entire S-Bahn network. The first ten vehicles will enter service as early as 2020. The remaining vehicles will then be successively added to the Berlin fleet through to 2023. Vehicle production and final assembly will take place at Stadler Pankow GmbH's Berlin factory.

This press release and press pictures are available at:
www.siemens.com/press/ PR2016010142MOEN

Siemens AG (Berlin and Munich) is a global technology powerhouse that has stood for engineering excellence, innovation, quality, reliability and internationality for more than 165 years. The company is active in more than 200 u , u , u z . O ’ producers of energy-efficient, resource-saving technologies, Siemens is No. 1 in offshore wind turbine construction, a leading supplier of gas and steam turbines for power generation, a major provider of power transmission solutions and a pioneer in infrastructure solutions as well as automation, drive and software solutions for industry. The company is also a leading provider of medical imaging equipment – such as computed tomography and magnetic resonance imaging systems – and a leader in laboratory diagnostics as well as clinical IT. In fiscal 2015, which ended on September 30, 2015, S v u €75.6 €7.4 billion. At the end of September 2015, the company had around 348,000 employees worldwide.

Further information is available on the Internet at www.siemens.com.

Stadler Rail Group, a systems supplier of customer-specific solutions for rail vehicle construction, is headquartered in Bussnang, Switzerland, and has locations in Switzerland (Altenrhein, Bussnang, Winterthur and Biel), Germany (Berlin-Pankow, Berlin-Reinickendorf and Velten), Poland, Hungary, the Czech Republic, Italy, Austria, the Netherlands, Algeria and the U.S. The Group has around 6,000 employees. The most prominent vehicle families produced by the Stadler Rail Group are the GTW articulated railcar (600 trains sold), the RS1 Regio Shuttle (497 trains sold), the FLIRT (1,128 trains sold), the double-decker, multiple-unit train KISS (216 trains sold), and the EC 250 high-speed train (29 sold trains) in the main-line segment, and the Variobahn (407 sold vehicles) and Tango (159 sold vehicles) in the tram segment. The commuter transport segment is supplemented by the Metro (13+24 sold vehicles). Stadler also produces meter-gauge rail vehicles, passenger coaches and locomotives, and is the ’ u u -and-pinion railway vehicles. In addition, Stadler Rail Service maintains 15 rail vehicle fleets comprising over 300 vehicles operating 60 million kilometers a year.

All news from this category: Corporate News