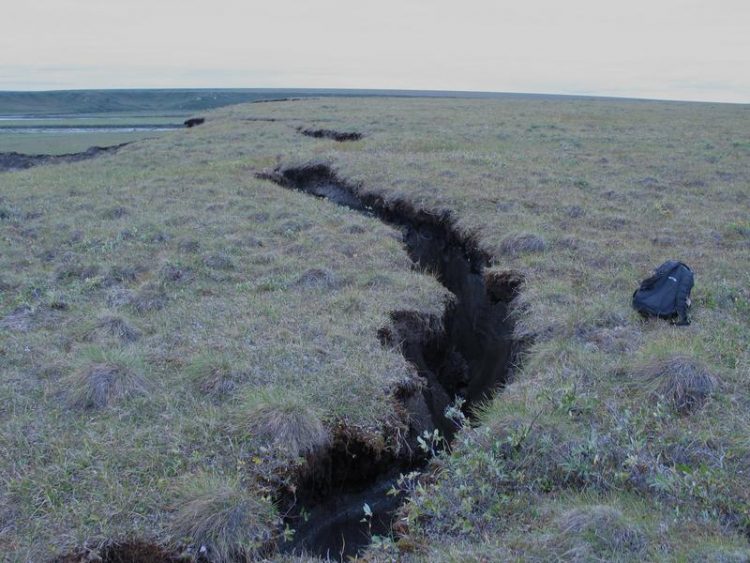 An international team of researchers has now measured riverbank erosion rates, which exceed all previous records, along the Itkillik River in Alaska's north. In a stretch of land where the ground contains a particularly large quantity of ice the Itkillik River eats into the river bank at 19 metres per year, the researchers report in a study recently published in the journal Geomorphology.

'These results demonstrate that permafrost thawing is not exclusively a slow process, but that its consequences can be felt immediately', says permafrost researcher Dr Jens Strauss from the Pots-dam research unit of the Alfred Wegener Institute, Helmholtz Centre for Polar and Marine Research (AWI).

Together with colleagues from the USA, Canada and Russia he investigated the Itkillik River at a loca-tion where the river cuts through a plateau, and the subsurface of which consists to 80 percent of pure ice and to 20 percent of frozen sediment.

'This ground ice is between 13,000 and more than 50,000 years old, extends column-like to depths of more than 40 metres and in the past stabilised the riverbank zone', says Jens Strauss.

However, as the scientists' research work, which extended over several years, demonstrated, these stabilisation mechanisms fail if two factors coincide: (1) the river carries flowing water over an ex-tended period; (2) the riverbank consists of a steep cliff, the front of which faces south and therefore is exposed to a lot of direct sunlight.

Jens Strauss: 'There are two reasons for the fast and, especially, enduring, decay of this cliff. On the one hand the river water is warmer than the permafrost, thaws it and immediately transports the falling material away. This transport away is particularly fast if there is a very large amount of ice in the ground.'

And on the other hand the cliff is thawed by the sunlight. 'Although the mean annual temperature in this region is minus twelve degrees Celsius, in the summer sunlight it becomes so warm that lumps of ice and mud flow down the slope', reports the study's lead author Mikhail Kanevskiy from the Uni-versity of Alaska Fairbanks.

In all, in the 2007 to 2011 period, the approximately 700 metre long and 35 metre high cliff retreated up to 100 metres. A land area of approximately 31,000 square metres was lost in this time. This cor-responds to the size of around 4.3 football fields. Converted to a mass of ice and soil, the Itkillik River carried away 70,000 tonnes of material per year – including 880 tonnes of organic material (organic carbon), previously stored in the permafrost soil.

In addition, in August 2007 the scientists witnessed how, in only a few days, up to 100 metre long and 13 metre deep fissures formed in the plateau and an 800 square metre block collapsed into the river. 'Such failures follow a defined pattern. First, the river begins to thaw the cliff and scours an overhang at the base. From here, fissures form in the soil following the large ice columns. The block then disconnects from the cliff, piece by piece, and collapses', explains Jens Strauss.

Luckily, the section of the river with the high erosion rates lies in a very sparsely populated area, so that neither villages nor important structures such as roads or buildings are endangered. However, the magnitude of the riverbank erosion gives Jens Strauss food for thought: 'The rate at which a riverbank retreats in permafrost regions depends on the ice content of the soil and other geograph-ical factors. In view of the increasing mean temperatures in the Arctic, our Itkillik River example clearly demonstrates the speed at which erosion can take place.'

The objective now is to apply this newly gained knowledge when planning new settlements, power routes and transport links, for example. 'What's more, the erosion impairs water quality in the rivers. A fact that can become a problem for all those communities that produce their potable water by treating river water', says Jens Strauss.

Printable photographs can be found in the online version of this press release at: http://www.awi.de/nc/en/about-us/service/press.html

The Alfred Wegener Institute researches in the Arctic, the Antarctic and oceans in the central and high latitudes. It coordinates polar research in Germany and provides important infrastructure such as the research icebreaker Polarstern and stations in the Arctic and Antarctic for the international science community. The Alfred Wegener Institute is one of the 18 research centres belonging to the Helmholtz Association, which is Germany's largest scientific organisation.