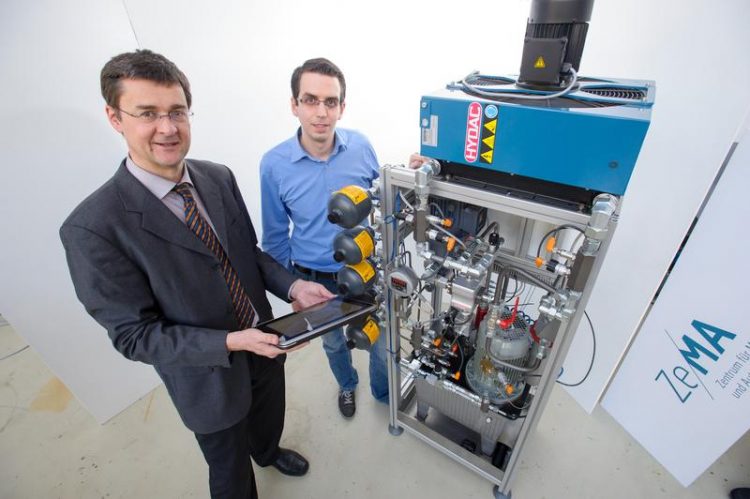 The mobile tablet-based system supplies information on the operational state of industrial machinery and plant equipment and can inform operators if a part needs to be replaced or if a repair can be postponed. The system uses sensors that continuously acquire data on parameters such as vibrational frequency or temperature.

The engineers in the research team are working with the German Research Center for Artificial Intelligence (DFKI) and the HYDAC group to automatically associate patterns in the data with typical error conditions or failure modes.

The researchers will be showcasing the method using a hydraulic test bench at HANNOVER MESSE from April 13th to April 17th. The team will be exhibiting at the Saarland Research and Innovation Stand in Hall 2, Stand B 46.

It is well-known that long before a piece of technical equipment actually fails, changes occur in its operational behaviour. The machine might start to make different sounds or to vibrate more strongly, or it may become hot. And it’s not just domestic washing machines that act this way, the same behaviour is found in very large machines such as wind turbines or industrial process plants.

If a part fails or if a valve or pump suddenly stops working, if the cooling system malfunctions or the pressure is too low, the consequence all too often is that an entire plant has to shut down – and that can prove to be expensive. ‘Our sensor system allows us to observe the current condition of a plant. We are working on getting the system to issue very early warnings at the first sign that the plant may fail or malfunction. By combing multiple sensors we are able to register even the smallest of changes – changes that would simply not be detectable with a single sensor,’ explains Andreas Schütze.

The approach adopted by the team involves attaching vibration sensors at numerous positions on the machine to provide a continuous stream of measurement data. The engineers also incorporate data from the process sensors that are now installed as standard on most of today’s machines. The research group will be using a hydraulic test bench to demonstrate their system at HANNOVER MESSE 2015.

‘We are studying how we can correlate sensor signal patterns, such as vibrational frequencies, with typical damage and failure modes, such as reduced cooling performance or a drop in accumulator pressure,’ explains Schütze. To do this, the researchers have been analysing large quantities of measurement data in order to identify those patterns in the data that can be assigned to particular changes in the machine’s state.

‘From the mass of data acquired we filter out a manageable quantity of relevant sensor data that is characteristic of certain machine damage scenarios,’ explains graduate engineer Nikolai Helwig, who co-developed the hydraulic test bench. ‘Our aim is to be able to reliably detect disturbances in the machine’s operating cycle during the incipient damage phase and to establish mathematical models for the different fault levels.’

This information about the relationship between sensor signal patterns and incipient malfunction or damage is used by the engineers to teach the system so that in future it will be able to identify these states automatically. The project is a collaborative enterprise between Schütze’s team of engineers at Saarland University and the Center for Mechatronics and Automation Technology (ZeMA) and researchers at the German Research Center for Artificial Intelligence (DFKI) and the HYDAC group. ‘We use statistical methods to analyse the data. Future users of the system need to be able to interpret the numerical data correctly. That’s why we are working on automatically assigning meaning to the results generated by the system and then translating this into useful information for the user. The aim is to develop the system so that it can be trained to work with different types of machine and plant equipment and can be adapted and customized to meet their specific requirements,’ says Schütze.

By continuously monitoring the condition of the machine, the system can also recommend when to carry out particular remedial measures, such as replacing a spare part. ‘This makes it easier to plan maintenance operations on large or difficult-to-access plant machinery. Not only does this help to avoid damage, machine downtimes and production stoppages, it also avoids unnecessary maintenance work, such as the scheduled replacement of a machine component that is, in fact, still fully functional,’ says Schütze. ‘As the system is also capable of analysing whether production machinery was operating properly during a manufacturing process, it can also be used for quality control purposes. There are a large number of potential applications of this system, particular in the smart manufacturing processes envisaged under Industry 4.0.’

Furthermore, the integrated network of sensors monitors whether the sensors themselves are functioning properly. ‘The system is constantly checking whether the individual sensors are supplying reliable measurement data. If a particular sensor doesn’t appear to be working correctly, the data it delivers is not included in the analysis. The system is therefore robust and has no difficulty coping with the failure of individual sensors, as defective sensors are simply bypassed,’ explains Schütze.

Background:
Saarland University, Saarland University of Applied Sciences (HTW) and industrial partners are working together at ZeMA – Center for Mechatronics and Automation Technology in Saarbrücken to strengthen the fields of mechatronic engineering and industrial automation in Saarland and to promote technology transfer. ZeMA is home to a large number of industry-specific development projects and projects aimed at transforming research findings into practical industrial applications. http://www.zema.de/