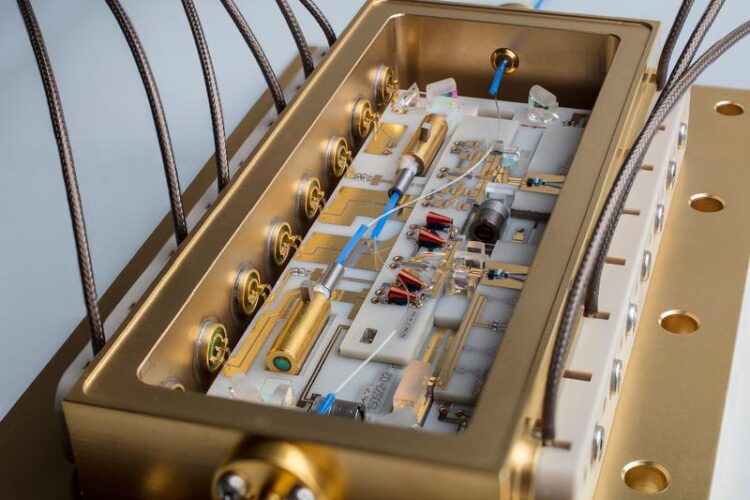 The Ferdinand-Braun-Institut, Leibniz-Institut für Höchstfrequenztechnik (FBH) presents its advanced developments at the Photonics Days Berlin Brandenburg both at the conference and the accompanying exhibition.

The Photonics Days will be held on October 5 and 6, 2022 in Berlin Adlershof and bring together experts from photonics, optics, microsystems technology, and quantum technology. Scientists from the Ferdinand-Braun-Institut are actively involved as chairs of the sessions “Berlin Laser Tech Symposium” and “Berlin Quantum Optics Symposium”. In a talk, they also present the progress achieved in high-power diode lasers with very high repetition rates. FBH will showcase its developments at the booth, which include:

FBH has many years of experience in the development, fabrication, and qualification of lasers and optical amplifiers for challenging applications in space, on satellites, and for use in quantum technologies. Currently, the institute manufactures more than 50 laser modules, including devices with 1064 nm emission wavelength, to be used for fundamental research on ultracold atoms on board the International Space Station (ISS). These modules are equipped with semiconductor chips that amplify the light of a 1064 nm laser with low output power to high power densities up to 60 MW/cm2. The facets of the optical amplifier are extremely stressed by the elevated emission power and must therefore be particularly well protected to ensure that the module functions smoothly. Thanks to improved facet passivation in an ultra-high vacuum, the scientists have now been able to significantly increase the reliability and lifetime of the amplifiers. This is demonstrated by accelerated aging tests over 5,000 hours at excessive load. The probability that the amplifier chips will fail when operated under normal conditions during the mission is thus extremely low. The optical amplifier, together with the 1064 nm laser and further components, will be integrated into the module on FBH’s well-established technology platform, which has already been successfully used several times for these kinds of applications.

FBH will also present its advances in high repetition rate pump lasers – for pulsed and up to CW operation – to be used in future high-energy class solid-state laser systems. The institute was able to increase the peak output power of its diode laser bars in quasi-continuous operation by up to four times while maintaining excellent efficiency. This reduces the cost in euros per watt – a key parameter for industry. FBH builds the optimized diode lasers into stack modules, with improvements in packaging and optics. For example, a fiber-coupled pulsed pump laser source with 1 kW output power at 780 nm wavelength was demonstrated in a 1 mm core fiber (previously 1.9 mm). The passively cooled module was able to increase the duty cycle from 20 % to up to 50 % (10 ms 10…50 Hz).
In addition, CW operation of 780 nm stack modules was successfully demonstrated for the first time. During the transition from pulsed operation (duty cycle: 10 %) to CW operation, the optical pulse power increased by a factor of 8 and reached 750 W at 50 A, without affecting the laser’s brilliance. Thermal resistance increased only 3-fold thanks to microchannel-free cooling.

At the booth, FBH will be exhibiting one if its UV LED-based irradiation system that can be used to inactivate multi-resistant pathogens including MRSA and coronaviruses such as SARS-CoV-2 directly on humans without harming the skin. The systems are each equipped with 120 LEDs emitting at a wavelength of 233 nm, which were developed jointly with Technische Universität Berlin. FBH has recently significantly optimized the efficiency of its far-UVC LEDs and integrated the compact devices into a swiveling irradiation system. Like the previous systems, it was designed and realized by FBH’s in-house Prototype Engineering Lab. It is now being tested directly on humans for the first time at the Charité.

Thanks to optimized semiconductor epitaxy and chip process technology, these latest-generation light-emitting diodes can be operated at currents twice as high as before – delivering more than 3 mW output power at 200 mA. Efficient heat dissipation is achieved by optimized LED packages with aluminum reflectors and plano-convex lenses, providing a beam angle of only 60 degrees. This, in turn, increases the transmission due to the integrated spectral filter. The UVC light emitted is free of skin-damaging wavelengths above 240 nm and has an intensity of 0.4 mW/cm2 – thus, almost ten times what previous systems achieved.

https://photonics-days-berlin-brandenburg-2022.b2match.io/ Program of the Photonics Days 2022