Man and the Sea: DSM plans new special exhibitions for 2021 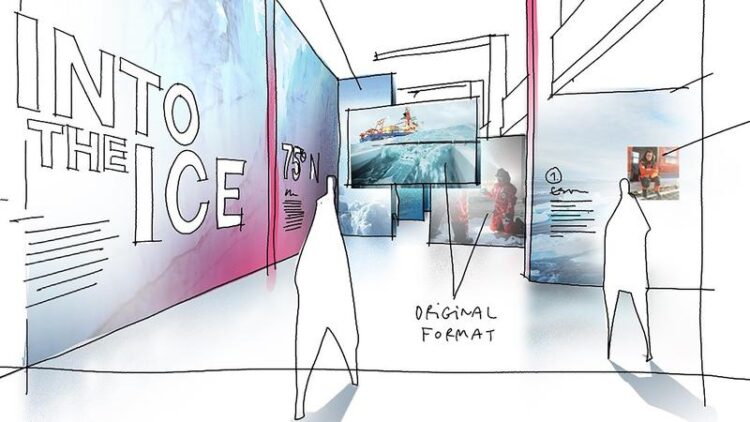 Model sketch of the photo exhibition INTO THE ICE.
DSM / Christoph Geiger

How do oceans and shipping shape our lives? What influence do we have on the oceans? “Man and the Sea – What the Oceans Mean to Us” – this is the title of the new exhibition focus presented by the German Maritime Museum (DSM) / Leibniz Institute for Maritime History on the occasion of the UN Decade of Ocean Exploration for Sustainable Development. During the current corona-related closure of the museum, preparations for new special exhibitions are in full swing.

Meanwhile, the museum will remain open digitally around the clock during the second lockdown. Virtual tours, digital ship models, learning and hands-on opportunities, 360-degree videos from aboard the POLARSTERN and much more exciting content can now be found bundled together at www.dsm.museum/digital. New are videos with experiments to try out. They invite children to discover natural and environmental phenomena in a playful way.

They can be seen on YouTube www.youtube.com/leibnizdsm and on Facebook www.facebook.com/leibnizdsm. In virtual mini-guides, employees from research and education also invite children to discover new exhibits or focus on topics in the exhibitions. Informative five-minute videos have so far focused on the SEEFALKE and the 360° POLARSTERN exhibition. The mini-guided tours can also be seen on YouTube and Facebook.

“Treasures from our collection” are now on virtual tour

Long popular and now also available to experience virtually: the event series “Treasures from our Collection,” or SAUS for short. The format itself is not new, but could not take place for a long time due to corona. Now the guided tours are offered on the third Sunday of each month from 11 a.m. on YouTube and Facebook. The first video is already online: Dr. Frederic Theis tells exciting details about the model of the H.M.S BEAGLE, which is currently on display as part of the KARTEN WISSEN MEER exhibition. The British barque became famous because Charles Darwin set out on a second expedition with her from 1831 to 1836.

“Museum to go”: explore exhibits in the Corona period from the outside

In February, the “Museum to Go” window gallery opens at the extension. A stroll along the glass front will whet your appetite: new lettering reveals secrets and raises questions about objects visible through the panes.
In the digital-analog exhibition “Cocoa, Coffee, Tobacco – Intoxicants in the Past,” students present their research findings on the historical transport, trade and consumption of these goods. The opening is scheduled for the end of March.

Focus on photographs from the colonial era

In April, the outdoor exhibition “Seeing the Other? The Colonialist Gaze” will open in the rotunda at Museumshafen. It shows motifs from travel albums taken by marines sent from the Kaiserreich of the people in the German colonies of the time. With this show, the DSM discusses for the first time the relationship of war and merchant shipping with German colonial history and brings its critical examination of the museum’s colonial history collections to the public.

Children’s exhibition “Off to Sea” and an Olympic sailing boat

Starting at the end of May, the DSM will accompany the UN Decade of Ocean Exploration for Sustainable Development, which starts in 2021, with a new special exhibition area on the topics of climate change, shipping through the ages and the history of research shipping. The common motto is “Man and the Sea – What the Oceans Mean to Us.” In the course of this, the interior of the extension building will be given a completely new look. Where the large globe of the SEA CHANGES exhibition can now be seen, the sailing boat in which the former regatta sailor Wilhelm Kuhweide won gold at the 1964 Olympic Games will be enthroned. Large-scale installations illustrate the extent of climate change. In the children’s exhibition “Off to the Sea,” young and old are asked to get active: Sea change can be explored in a playful way on large touchscreens – virtual mussel beds can be grown, for example. The show is on loan from the Stralsund Marine Museum, which will be renovated in the coming years.

Thanks to other objects from Stralsund, the DSM illustrates the history of research shipping. Guests explore the ship models as well as measuring instruments from different periods and learn about the data collected by researchers.

Fascinating impressions of the MOSAiC expedition

“INTO THE ICE” is the title of a photo exhibition with impressive pictures taken by various photographers who accompanied the MOSAiC expedition. Some of the motifs were taken by Esther Horvath. The photographer at the Alfred Wegener Institute, Helmholtz Centre for Polar and Marine Research was awarded the World Press Photo Award last year.
“INTO THE ICE” documents the setup of the research camp on the ice floe, life on board and encounters with polar bears. The darkness of the polar night and temperatures of 25 degrees below zero presented the photographers with special technical challenges. When shutter releases freeze, changing the battery with several gloves becomes a feat of strength, patience, endurance and tricks are needed.

Dangers of World War II remains in the North Sea

Where are wrecks and munitions located in the North Sea? What dangers do they pose to people and the environment? Researchers from the “North Sea Wrecks” project are getting to the bottom of these questions. The results of the European team are told in a traveling exhibition that is moving from Bremerhaven to the countries bordering the North Sea. The mobile show will be on display from August, initially in front of the DSM during the “Lütte Sail” windjammer festival.

The dimensions of the product “ship” make the production site shipyard an exciting place to be. Starting in August, interested visitors can visit this place of longing at the DSM via an interactive shipyard model. Thanks to digital mediation media (AR/VR), guests themselves become actors and immerse themselves in the world of virtual shipbuilding.

Not an exhibition, but also a major project is the completion of the new research depot in the fishing port. Construction will be completed in the spring. By the end of the year, some 380,000 archival records and around 60,000 museum objects as well as taxidermied animals will move in there on an area of 2300 square meters. The depot offers excellent storage conditions for the historical exhibits and enables the research team at the DSM to work with the materials directly on site.