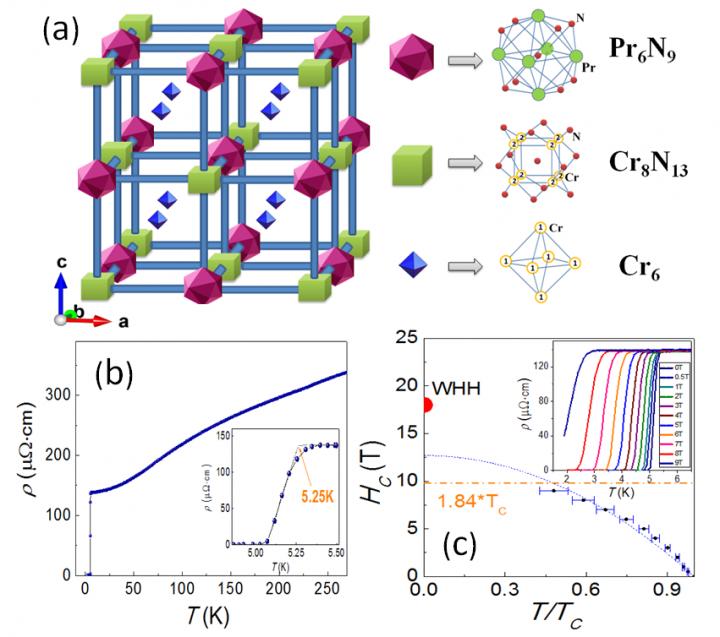 Pr3Cr10-xN11 was first synthesized and characterized by Broil et al. in 1995. The compound crystallizes in space group Fm-3m (No. 225) with lattice constant a = 12.891 Å. It contains 192 atoms in a face-centered cubic (FCC) unit cell with 3 kinds of building blocks as illustrated in Fig (a).

The electrical resistivity [Fig (b)], magnetization and specific heat of Pr3Cr10-xN11 show bulk superconductivity at 5.25 K. The superconductivity in Pr3Cr10-XN11 shows several distinct characters. A relatively large upper critical field is found at the zero-temperature limit, Hc2(0) ~ 12.6 T, which is larger than the Pauli limit for paramagnetic pair-breaking field as shown in Fig (c).

The material has a large electronic specific-heat coefficient of 170 mJ K-2 mol-1, about 10 times larger than that estimated by the electronic structure calculation, which suggests that correlations between 3d electrons is very strong in Pr3Cr10-xN11, and thus quantum fluctuations might be involved.

From electronic structure calculations, the density of states at the Fermi energy is predominately contributed by Cr 3d electrons. This result demonstrates that Pr3Cr10-xN11 is the first Cr-based superconductor discovered in Chromium Nitrides and it represents a rare example that possibly unconventional superconductivity emerges in a 3D system with strong electron correlations.