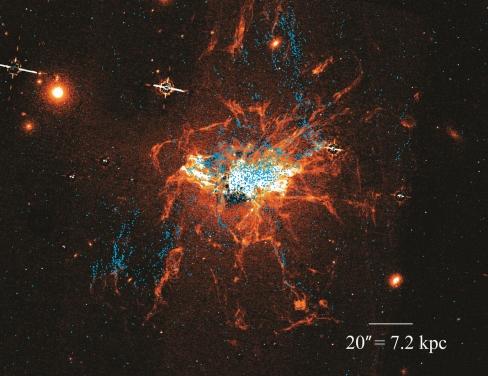 Young globular clusters (ages up to 1 billion years) are indicated by the blue dots. These globular clusters are closely associated with a filamentary network of cool gas, colored orange to white, which extends to the outer reaches of the giant galaxy at the center of the Perseus galaxy cluster. Round or oval objects, also colored orange to white, are smaller galaxies that are part of the same galaxy cluster. Credit: @The University of Hong Kong

Globular clusters are the oldest visible objects in the Universe – each contains hundreds of thousands to occasionally over ten million stars all born at essentially the same time, and densely packed into a spherical volume with diameter over a thousand times smaller than the diameter of our Galaxy.

Globular clusters are thought to have formed soon after the Universe began nearly 13.8 billion years ago, at the same time as, or perhaps even before, the first galaxies formed. They have since remained largely unchanged, apart from the ageing and death of their constituent stars.

As ancient, pristine witnesses to the formation of galaxies, globular clusters might provide vital clues to how infant galaxies form and then grow over time – if only we knew how globular clusters themselves form and accumulate around galaxies. Our Galaxy is surrounded by about 150 such globular clusters, some of which are visible to the naked eye from a sufficiently dark site.

They research team led by Dr Lim discovered that globular clusters around the giant galaxy at the center of the Perseus galaxy cluster are not all ancient objects: rather, a few thousand have formed over at least the past 1 billion years, and perhaps many more over the course of cosmic history.

As shown in the accompanying picture, the younger globular clusters are closely associated with, and were therefore born in, a complex filamentary network of cool gas that extends to the outer reaches of the giant galaxy.

This cool gas is thought to have precipitated from the hot gas that infuses the entire Perseus galaxy cluster; the density of the hot gas and hence the rate at which this gas cools rises rapidly towards the center of the galaxy cluster. After they form, the infant globular clusters are no longer bound to the network of cool gas and rain inwards onto the giant galaxy, like raindrops condensing and falling from clouds.

The globular clusters that formed from the network of cool gas at the center of the Perseus galaxy cluster span a broad range of masses, but with a diminishing number at higher masses. Their number dependence with mass follows the same trend as the truly ancient globular clusters, as well as less massive star clusters in our Galaxy and other spiral galaxies – thus affirming a common formation mechanism for star clusters over all mass scales (from those weighing just over ten Suns to those weighing about ten million Suns) irrespective of the environment in which they formed, whether it be from gas compressed in the spiral arms of galaxies or dense gas at the centers of galaxy clusters; or in ways yet to be discovered as is the case for truly ancient globular clusters.