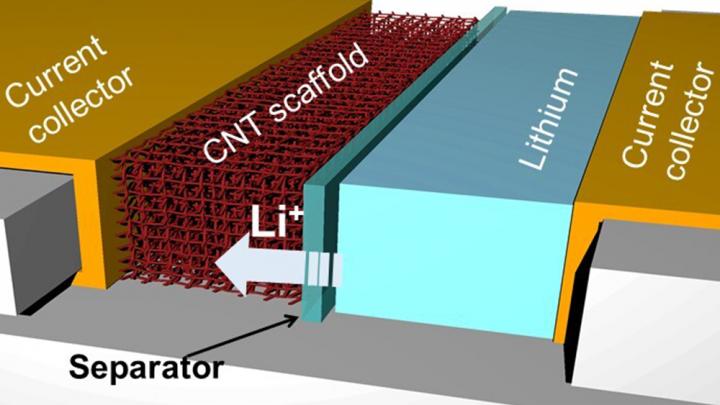 Cell phone batteries often heat up and, at times, can burst into flames. In most cases, the culprit behind such incidents can be traced back to lithium batteries.

Despite providing long-lasting electric currents that can keep devices powered up, lithium batteries can internally short circuit, heating up the device.

Researchers at Texas A&M University have invented a technology that can prevent lithium batteries from heating and failing. Their carbon nanotube design for the battery's conductive plate, called the anode, enables the safe storage of a large quantity of lithium ions, thereby reducing the risk of fire.

“We have designed the next generation of anodes for lithium batteries that are efficient at producing large and sustained currents needed to quickly charge devices,” said Juran Noh, a material sciences graduate student in Dr. Choongho Yu's laboratory in the J. Mike Walker '66 Department of Mechanical Engineering.

“Also, this new architecture prevents lithium from accumulating outside the anode, which over time can cause unintended contact between the contents of the battery's two compartments, which is one of the major causes of device explosions.”

Their results are published in the March issue of the journal Nano Letters.

Hence, the property of the anode, or the electrical conductor that houses lithium ions within the battery, plays a decisive role in the battery's properties. A commonly used anode material is graphite.

In these anodes, lithium ions are inserted between layers of graphite. However, Noh said this design limits the amount of lithium ions that can be stored within the anode and even requires more energy to pull the ions out of the graphite during charging.

These batteries also have a more insidious problem. Sometimes lithium ions do not evenly deposit on the anode. Instead, they accumulate on the anode's surface in chunks, forming tree-like structures, called dendrites. Over time, the dendrites grow and eventually pierce through the material that separates the battery's two compartments.

This breach causes the battery to short circuit and can set the device ablaze. Growing dendrites also affect the battery's performance by consuming lithium ions, rendering them unavailable for generating a current.

Noh said another anode design involves using pure lithium metal instead of graphite. Compared to graphite anodes, those with lithium metal have a much higher energy content per unit mass or energy density. But they too can fail in the same catastrophic way due to the formation of dendrites.

To address this problem, Noh and her teammates designed anodes using highly conductive, lightweight materials called carbon nanotubes. These carbon nanotube scaffolds contain spaces or pores for lithium ions to enter and deposit. However, these structures do not bind to lithium ions favorably.

Hence, they made two other carbon nanotube anodes with slightly different surface chemistry — one laced with an abundance of molecular groups that can bind to lithium ions and another that had the same molecular groups but in a smaller quantity. With these anodes, they built batteries to test the propensity to form dendrites.

As expected, the researchers found that scaffolds made with just carbon nanotubes did not bind to lithium ions well. Consequently, there was almost no dendrite formation, but the battery's ability to produce large currents was also compromised. On the other hand, scaffolds with an excess of binding molecules formed many dendrites, shortening the battery's lifetime.

However, the carbon nanotube anodes with an optimum quantity of the binding molecules prevented the formation of dendrites. In addition, a vast quantity of lithium ions could bind and spread along the scaffold's surface, thereby boosting the battery's ability to produce large, sustained currents.

“When the binding molecular groups are abundant, lithium metal clusters made from lithium ions end up just clogging the pores on the scaffolds,” said Noh. “But when we had just the right amount of these binding molecules, we could 'unzip' the carbon nanotube scaffolds at just certain places, allowing lithium ions to come through and bind on to the entire surface of the scaffolds rather than accumulate on the outer surface of the anode and form dendrites.”

Noh said that their top-performing anodes handle currents five times more than commercially-available lithium batteries. She noted this feature is particularly useful for large-scale batteries, such as those used in electric cars, that require quick charging.

“Building lithium metal anodes that are safe and have long lifetimes has been a scientific challenge for many decades,” said Noh. “The anodes we have developed overcome these hurdles and are an important, initial step toward commercial applications of lithium metal batteries.”