Shedding light on the brown color of algae 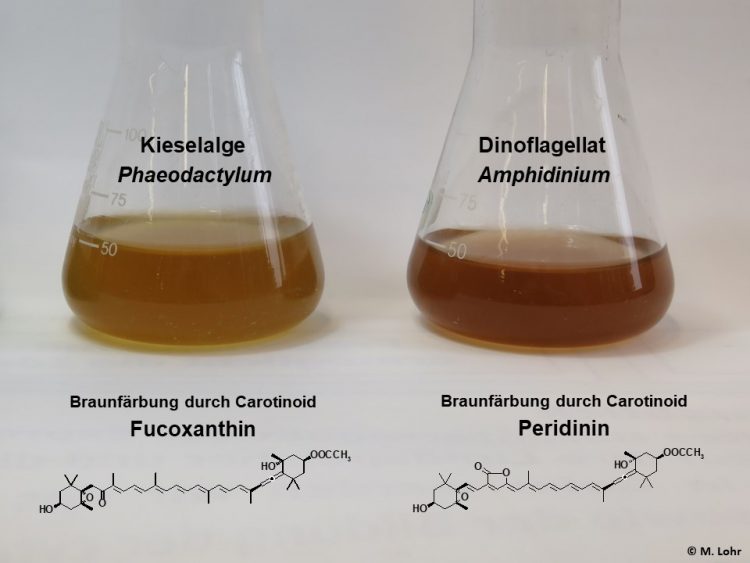 The brown coloration of diatoms and dinoflagellates is due to the presence of the light-harvesting carotenoids fucoxanthin and peridinin respectively, which transfer the absorbed light energy to chlorophylls for photosynthesis. photo/©: Martin Lohr

For many people algae are just an odorous nuisance on their vacation beach or unwelcome guests in the garden pond and aquarium.

This does not take into account, however, the enormous effects these mostly microscopic aquatic inhabitants have on the global climate and does not pay due heed to their role as nutrition for the fish of the oceans.

Marine algae convert roughly the same amount of carbon dioxide into biomass per year by photosynthesis as all land plants combined. This algal biomass forms the ultimate base of the food chain that feeds other organisms in aquatic ecosystems.

To harness the energy of sunlight for photosynthesis, plants must first absorb the light using so-called light-harvesting pigments. Terrestrial plants do this mainly by means of chlorophylls, which lend the leaves their typical green color. But unlike green terrestrial plants, many algae have a brownish color.

The pigments responsible for this belong to a group of substances called carotenoids, which are also involved in the process of vision in the human eye. These carotenoids enable algae to collect the often predominant green light under water with greater efficiency, thus gathering more energy for photosynthesis and the production of biomass.

Fucoxanthin, the light-harvesting pigment employed by the majority of marine algae, is one of the world's most abundant carotenoids, but researchers still do not know how algae synthesize this molecule.

Working in collaboration with colleagues from the University of California, Berkeley, researchers at the Department of Biology of Johannes Gutenberg University Mainz (JGU) have now managed to unveil the first stage of fucoxanthin biosynthesis. Interestingly, the enzyme responsible is closely related to one that has already been extensively studied, i.e., violaxanthin de-epoxidase.

Violaxanthin de-epoxidase is present in land plants and most algae and triggers the formation of photoprotective carotenoids during high light stress. “I think we can safely assume that carotenoids in organisms that use photosynthesis originally served only as pigments that were designed to protect against harmful effects of light,” said Dr. Martin Lohr, the head of the research project.

“Our work shows that algae duplicated individual tools from the toolbox of enzymes required for the formation of these carotenoids and then developed a new function for one of the copies. This has allowed them to evolve more complex pigments with modified absorption properties, which are particularly effective as light-harvesting pigments.”

More than ten years ago, Dr. Martin Lohr's research group had discovered the first evidence of the enzymatic function of a then new form of these enzymes, called violaxanthin de-epoxidase-like (VDL) protein, which occurs exclusively in algae. But it was only after the study's coauthor, Dr. Oliver Dautermann, had established techniques for investigating the VDL function by introducing the enzyme into tobacco leaves that Lohr and his team would be able to compare the characteristics of VDL proteins from various algae.

Their findings confirmed the key role of VDL as an enzyme in the biosynthesis of fucoxanthin and other algal light-harvesting carotenoids, such as peridinin in dinoflagellates. As yet, however, they had still not been able to demonstrate that VDL did indeed have the catalytic function in algae that it showed in tobacco plants.

Two postdocs in the team of Professor Kris Niyogi at the University of California, Berkeley, eventually provided the conclusive evidence by isolating an alga with a defective VDL gene. Pigment analyses from both laboratories confirmed that the carotenoid biosynthesis in this algal mutant was interrupted at the stage involving the pigment violaxanthin.

It is still too early to say whether the ability to form fucoxanthin could ever be transferred to agricultural crops and whether this would actually result in increased yields. Recent investigations undertaken by Lohr's team in cooperation with other American partners suggest that the pathway of fucoxanthin biosynthesis in many algae is more complicated than previously thought. Thus, for the time being, green will continue to prevail as the leaf color of land-based plants.

Images:
https://download.uni-mainz.de/presse/10_imp_pflanzen_algen_enzym_01.jpg
The brown coloration of many algae is caused by the presence of specialized photosynthetic carotenoids.
photo/©: Martin Lohr

https://download.uni-mainz.de/presse/10_imp_pflanzen_algen_enzym_02.jpg
The brown coloration of diatoms and dinoflagellates is due to the presence of the light-harvesting carotenoids fucoxanthin and peridinin respectively, which transfer the absorbed light energy to chlorophylls for photosynthesis.
photo/©: Martin Lohr

https://download.uni-mainz.de/presse/10_imp_pflanzen_algen_enzym_03.jpg
Two cells of the diatom Phaeodactylum tricornutum, the plastids of which are clearly apparent thanks to the red fluorescent light emitted by the photosynthetic pigments (chlorophylls) they contain.
photo/©: Christof Rickert and Martin Lohr