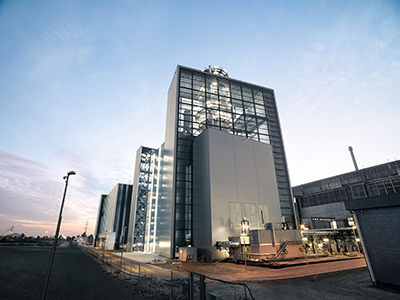 Combined cycle power plant at the location Lausward in Düsseldorf

On January 22, 2016, Siemens handed over the combined cycle power plant equipped with a Siemens H-class gas turbine at the Lausward location in the Düsseldorf (Germany) harbor area to the customer and operator, the utility company Stadtwerke Düsseldorf AG. The turnkey plant sets three new records in world-wide comparison.

During the test run before acceptance, unit “Fortuna” achieved a maximum electrical net output of 603.8 megawatts (MW), which is a new record for a combined cycle plant of this type in a single-shaft configuration. A new world record of around 61.5 percent for net power-generating efficiency was also achieved, enabling Siemens to beat its own efficiency record of 60.75 percent set in May 2011 at the Ulrich Hartmann power plant located in Irsching in the south of Germany.

The high efficiency level makes the power plant especially environmentally friendly. In addition, unit “Fortuna” can also deliver up to around 300 MW for the district heating system of Düsseldorf – a further international peak value for a power plant equipped with only one gas and steam turbine.

This boosts the plant's fuel utilization up to 85 percent, while reducing CO2 emissions to a mere 230 gram per kilowatt-hour. The increase in the capacity and efficiency levels is the result of consistent ongoing developments, for example in the design of components, in the materials used, in the overall construction of the plant, and in the perfect interworking of all plant components.

“We optimized the power plant to enable it to be ideally positioned in one of the world's most demanding power markets. Together with the Stadtwerke Düsseldorf we are therefore very pleased that this plant set the new efficiency world record,” stated Willi Meixner, CEO of the Power and Gas Division within Siemens AG.

The gas turbine can run at full load in less than 25 minutes after a hot start, enabling it to also be used as a backup for renewables-based power production. This flexibility supports the operator in efforts to achieve economical operations in a challenging environment for conventional power plants.

Unit “Fortuna” was handed over to the customer 19 days ahead of the date set in the contract. The project on the bank of the Rhine was additionally a huge success with regard to occupational safety for everyone involved. More than two million hours of work in total were performed without a single accident.

Because of the plant's close proximity to the downtown area of the city, special importance was attached to minimum emissions, optical integration into the cityscape, and lowest achievable noise levels: On the opposite shore of the Rhine, across from the plant, the noise level is less than 25 decibels – quieter than a whisper.

To date Siemens has 76 H-class gas turbines under contract worldwide. With 17 units in commercial operation, the SGT-8000H fleet has already reached more than 195,000 hours of operation.

What an efficiency level of 61.5 percent means for the climate

In terms of the average emissions of power generation for all coal-fired power plants throughout the European Union, a natural-gas-fired combined cycle power plant such as this one, with an electrical efficiency of 61.5 percent, theoretically saves approximately 2.5 million tons of carbon dioxide (CO2) annually. This corresponds to the amount of CO2 emitted by 1.25 million passenger cars, each driving 15,000 kilometers a year.

The press feature on the combined cycle gas turbine power plant at the Lausward location at www.siemens.com/press/fortuna

For further information on the record-breaking power plant at www.siemens.com/fortuna