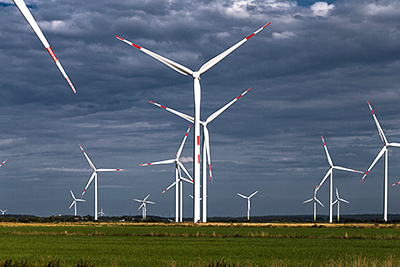 The Siemens D3 platform is the first choice for both the Cloosh Valley and the Sliabh Bawn wind farm projects in Ireland.

A second order includes 20 SWT-3.2-101 wind turbines for the Irish Sliabh Bawn Wind Farm in County Roscommon. Commissioning of the Cloosh project is scheduled for mid-2017; Sliabh Bawn for early 2017. Both orders include 15-year service agreements, including Siemens' advanced remote diagnostics, to help ensure the long-term reliability, performance and availability of the wind turbines.

The 108-MW-Cloosh project is part of SSE Renewables' development of a wind farm cluster in Cloosh Valley, near Rosscahill, County Galway. For Phase 1 of Galway Wind Park, 22 SWT-3.0-101 wind turbines were ordered in the summer of 2015, and construction is ongoing. Cloosh, the second phase of the cluster, is a co-development with Coillte that will be installed on the adjacent site. Together the projects are expected to generate clean energy for around 84,000 households.

The Sliabh Bawn Wind Farm project will be built on Sliabh Bawn mountain, south east of Strokestown. With 20 Siemens direct drive wind turbines it will reach an installed capacity of 64 MW and provide clean energy for approximately 41,000 households. A strong focus of the project is on local content: a community benefit scheme will deliver, for example, recreational facilities and support for local projects. Local businesses will be employed during construction and operation.

“With 2,400 MW of installed capacity, wind energy in the Republic of Ireland is not only a growing sector but also an industry creating jobs and benefiting communities. In this context the projects with our customers SSE Renewables, Bord na Mona and Coillte are of special significance to us,” says Thomas Richterich, CEO Onshore of Siemens' Wind Power and Renewables Division. “With a total capacity of 172 megawatts, the Cloosh Valley and Sliabh Bawn wind farms will contribute significantly to the Irish Government's renewable goals.”