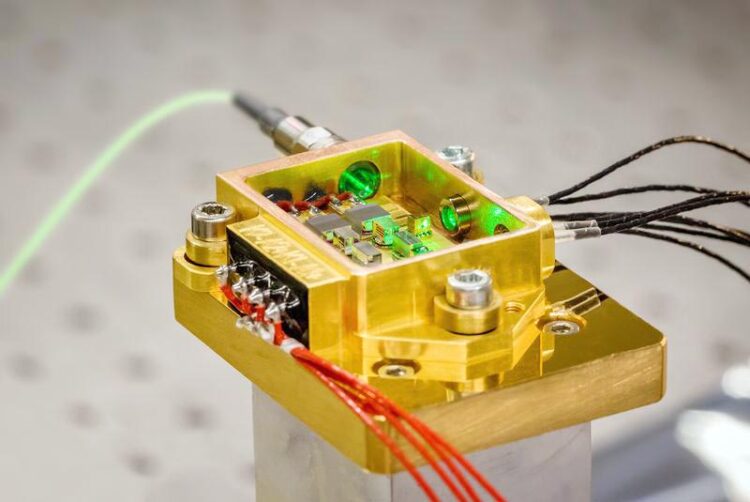 Was there life on Mars? This is the question that the European Space Agency (ESA) is setting out to answer with its ExoMars mission. The mission, in which Russia is a participant, is scheduled to launch this fall, although recent political developments have raised questions as to whether this will be possible. Part of the mission is an analytical system that was designed to operate in space and was created as part of the research work conducted at the Fraunhofer IOF. The researchers developed the miniaturized laser module for the ExoMars Rover’s mobile laboratory. The institute will present this Raman spectrometer, which is the size of a 50-cent coin at the LASER World of Photonics.

The “Rosalind Franklin” rover will analyze the mineralogical compounds on the surface of Mars, around 56 million kilometers away from the Earth, in order to search for traces of extraterrestrial life on the planet. To achieve this, the vehicle has an on-board drill and an array of scientific instruments. One of these instruments is a device called a Raman spectrometer. It can be used to analyze the diffusion of light from molecules, for example in the atmosphere, or from solids such as rock samples. The centerpiece of the spectrometer’s heavily miniaturized and space-worthy laser source is a diode-pumped solid-state laser with frequency doubling, constructed at Fraunhofer IOF in Jena.

The Raman spectrometer works as follows: Laser light is emitted, which interacts with the material to be analyzed. This causes what is known as the “Raman effect.” Energy from the light passes to the material and back. This changes the light energy, altering its wavelength. The light is then diffused back to the spectrometer, where the changes in the wavelength are analyzed. The differences between the new frequency and the original frequency of the light emitted can be used to draw conclusions about the composition of the material.

The green laser constructed in Jena works at a wavelength of 532 nanometers and more than 100 megawatts. “In total, our researchers have invested seven years of development time in order to adapt the module to the specific challenges of operating in space,” explains Dr. Erik Beckert, project manager of the ExoMars laser at Fraunhofer IOF. One of the common challenges for projects operating in space is the need for the components to be particularly small and light. For example, the laser, including its housing, only adds 50 grams of weight to the rover, the same as half a bar of chocolate.

But, despite being miniaturized, it has to deliver the same level of performance and robustness. The sensitive optical components also have to be constructed to withstand temperature fluctuations between -130 and +24 degrees and significant exposure to radiation in space, plus the heavy vibrations when the rover launches and lands.

Conventional methods for assembling optical components are not suitable for such extreme conditions. “This is why we have connected all of the components of the sensitive laser resonator and the secondary optics together using a laser-based soldering technique,” explains Beckert. “This ensures particularly strong stability in the face of thermal and mechanical effects and intense exposure to radiation.” Working with the Spanish laser manufacturer Monocrom, the Jena-based institute has created a total of five structurally identical lasers over the years for use in the Raman spectrometer. Now the researchers hope their technique can soon launch into space with the Mars mission.