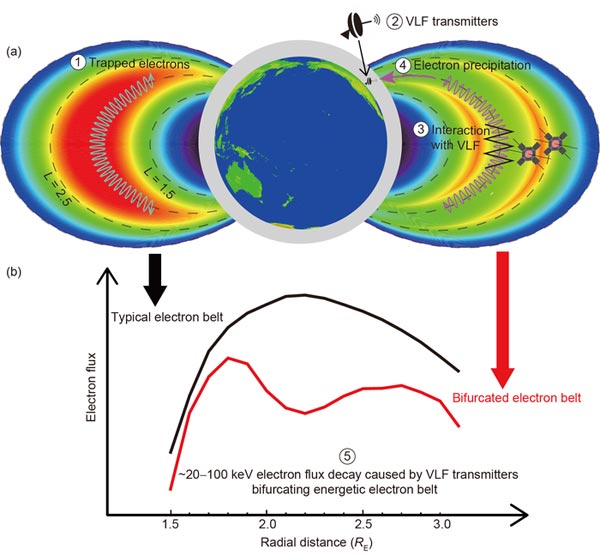 (a) Electron fluxes before (left side) and after (right side) resonant wave-particle interactions with VLF transmitter waves. (b) Variations of radial energetic electron flux profile from a typical (single-peak) structure to a bifurcated (double-peak) belt.
Credit: ©Science China Press

Narrow-band VLF transmitter waves originate from the powerful ground-based VLF transmitters for submarine communications, which are typically over the frequency range of 10–30 kHz. VLF transmitter signals, being guided by the gradients of the Earth’s magnetic field, can leak a portion of the wave power into the magnetosphere. Early theoretical studies suggested that VLF transmitter waves potentially play an important role in electron precipitations in the near-Earth space.

With the availability of high-resolution wave and particle data from multiple satellites in geospace and the development of state-of-the-art modeling tools over the past few decades, our understanding of the electron dynamics in Earth’s inner radiation belt and slot region has been significantly advanced, in which the contribution of VLF transmitter emissions is found critical. Therefore, this paper aims to review recent major advances made in uncovering the global distributions of anthropogenic VLF transmitter waves and exploring their artificial modification of Earth’s radiation belts, which can shed light on feasible mitigation of the natural space radiation environment, which is also known as the radiation belt remediation.

The accurate global model of VLF transmitter signals, including their frequency spectra, wave amplitudes, propagation properties, geomagnetic activity dependence, is crucial to quantify the exact effects of terrestrial VLF transmitters on radiation belt electrons. A great number of studies since 1958 have found out that VLF transmitter waves are frequently observed inside the plasmasphere within ~3 Earth radii, with stronger wave power on the nightside and during the local winter. The NWC transmitter located in Australia and the NAA transmitter located in North America are the two most powerful stations. The wave intensity is strictly confined in the longitude range related to its geographic location. Based on both observational and theoretical analysis, many studies suggest that VLF transmitter waves have two types of propagation mode: ducted and unducted modes.

Early quasi-linear theory based studies suggest that VLF transmitter waves potentially can significantly contribute to electron losses in the near-Earth space by calculating the quasi-linear wave-induced diffusion coefficients and electron lifetime. The observations that correlate the electron flux enhancements near or inside the drift loss cone with VLF transmitter wave intensity from low-Earth orbit satellite further confirms the electron precipitations driven by VLF transmitter waves. The most recent study reports the bifurcation of the inner energetic electron belt at energies of ~30–130 keV using raw flux measurements from Van Allen Probes, with a local minimum in the flux radial profiles precisely in the same region where VLF transmitter waves can theoretically reduce electron lifetimes. The following statistical study reveals that this bifurcation structure can be frequently observed under relatively quiet geomagnetic conditions, typically after significant flux enhancements that penetrate down to the heart of the inner belt. The quasi-linear diffusion simulation using the observed wave amplitudes of VLF transmitters and statistical wave models for other naturally occurring plasma waves systematically reproduce the observed bifurcation structure, providing direct quantitative evidence that VLF transmitters can efficiently remove tens of keV electrons at the near-Earth space, which are primarily responsible for bifurcating the energetic electron belt at tens of keV.

The paper also points out that such a demonstrated feasibility of mitigation of energetic electron fluxes can be similarly or even increasingly expected for a space-borne origin of artificial VLF waves. To better safeguard satellites and astronauts in space, a lot of more work needs to be done to enable human control of the natural radiation environment.