Medtec 2015: Getting the perfect fit for artificial hips 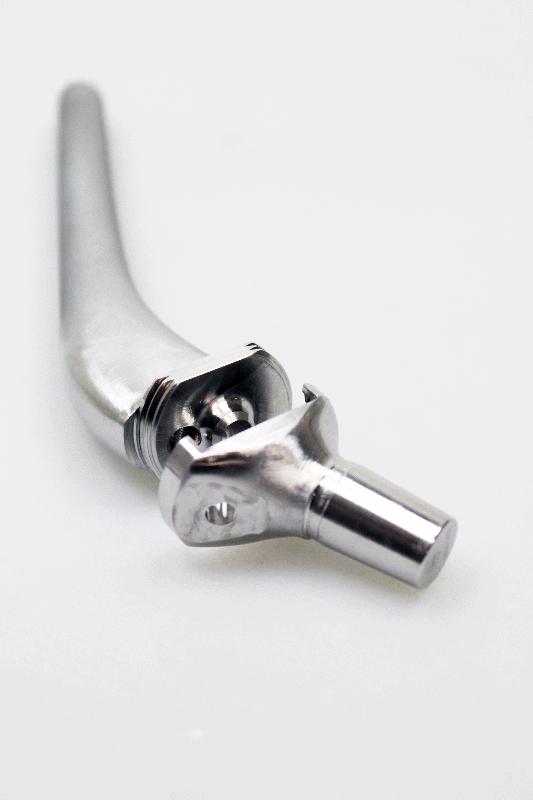 A painful hip that feels unstable and no longer has the same range of motion: For many patients, this means they need a prosthetic hip – something that happens to more than 200,000 people each year in Germany alone.

Implant manufacturers face numerous challenges; for example, the artificial joints may eventually break. In addition, orthopedic surgeons currently have no suitable method for precisely measuring leg length before the operation or for adjusting the implants accordingly.

The result is that after the operation, the leg can actually be longer or shorter than it used to be. This leads to problems with the spine, which have to be resolved using shoe inserts.

There’s a better solution on the horizon: With the completely new measuring technique developed by the Fraunhofer Institute for Machine Tools and Forming Technology IWU, orthopedic surgeons will be able to measure their patients’ leg lengths much more precisely.

The Fraunhofer researchers collaborated on the new system with several project partners: the Clinic for Orthopedics, Trauma Surgery and Plastic Surgery at the Leipzig University Hospital; University of Applied Sciences Zwickau and its Research and Transfer Centre; AQ Implants GmbH; and MSB-Orthopädie-Technik GmbH.

“The margin of error in our process is less than one centimeter,” explains Dr. Ronny Grunert, a researcher at IWU. “Eventually we’d like to get that down to five millimeters.” Currently, the usual procedure calls for the doctors to determine leg length with a tape measure, which can lead to errors of up to two centimeters.

Here’s how it works: With the patient in a prone position, the doctor affixes a small plastic box containing two LEDs to the patient’s shin. The doctor then takes hold of the patient’s heel and lifts it upward. With that motion, the two lights trace an arc that is recorded by a camera positioned about 1.5 meters to the side of the patient.

The principle is similar to that of a compass. The hip joint, from which the leg “hangs,” is essentially the point of the compass, while the LEDs act as the pencil. If the distance between the two changes, i.e. if the leg becomes shorter or longer, that will change the arc traced by the LEDs. The doctor takes this measurement twice – once right before the operation and once after the implant has been temporarily inserted. The box remains on the leg during the operation.

A software program compares both arcs to determine if the leg is the same length it was before the procedure. If necessary, the doctor can make adjustments to the artificial hip. Initial testing of a measuring system prototype has already met with success at the Leipzig University hospital. There are plans for a clinical trial later this year, and the new system could be on the market in about two years.

Fraunhofer’s researchers also optimized the hip implants, again working together with partners from industry, medicine and research. “We’ve developed an implant that can be adjusted to each individual patient,” says Grunert. The trick was to do away with prefabricated implants in various sizes and use a modular system instead.

In this method, the doctor can select the right hip stem as well as the right neck for each patient. Special screw connections are used to attach the individual parts to each other and the combined unit is implanted in the hip for testing. The doctor now measures the leg length, and, if necessary, can easily separate the implant’s various components to exchange them for better-fitting parts or adjust them as required.

Furthermore, once the parts have been joined together, it’s virtually impossible to separate and adjust them. That’s not the case for the specialized screws that hold the parts of the new implants together. The point where they connect is mechanically stable and prevents the implant from breaking.

The new system was developed within the “artificial joints” cooperative network, which is funded by the Federal Ministry for Economic Affairs and Energy (BMWi) and coordinated by Fraunhofer IWU. At the Medtec expo, the researchers will present the leg-length measuring system and the modular hip implant as well as the artificial joint network.