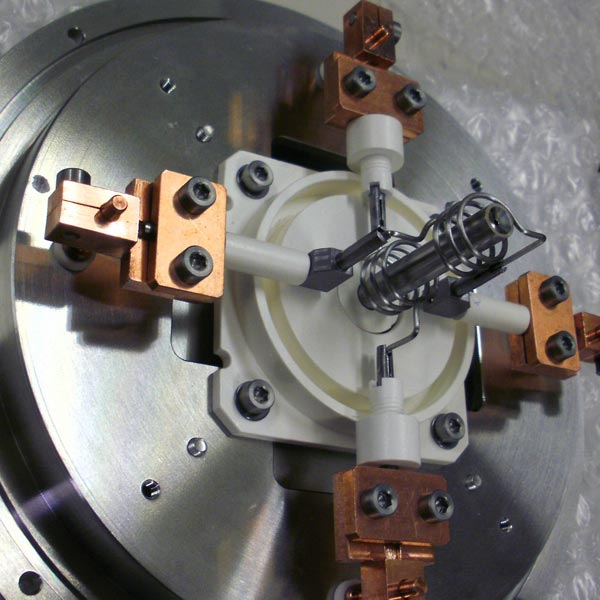 The gray tantalum tube surrounded by two heating elements in the center of the picture is part of the recently developed surface ion source installed in the JAEA-ISOL system in the JAEA tandem accelerator. photo: Tetsuya K. Sato, JAEA

An international collaboration led by the research group of superheavy elements at the Japan Atomic Energy Agency (JAEA), Tokai, Japan has achieved the ionization potential measurement of lawrencium (element 103) with a novel-type technique at the JAEA tandem accelerator.

Based on the empirically developed “actinide concept”, and in agreement with theoretical calculations, in today’s Periodic Table the series of actinide elements terminates with element 103, lawrencium (Lr). Now researchers have measured the first ionization potential of Lr, which reflects the binding energy of the most weakly-bound valence electron in lawrencium’s atomic shell.

Effects of relativity strongly affect this energy, and the experimental result is in excellent agreement with a new theoretical calculation, which includes these effects. It was shown that removing the outermost electron requires least energy in Lr among all actinides, as was expected. This validates the position of Lr as the last actinide element and confirms the architecture of the Periodic Table.

Since the introduction of the “actinide concept” as the most dramatic modern revision of the Periodic Table of the Elements by Glenn T. Seaborg in the 1940s, the element with atomic number 103, lawrencium (Lr), played a crucial role as the last element in the actinide series.

This special position turned out to set this element into the focus of questions on the influence of relativistic effects and the determination of properties confirming its position as the last actinide element. Consequently, the quest for data on chemical and physical properties of Lr was driving experimental and theoretical studies.

Two aspects most frequently addressed concerned its ground state electronic configuration and the value of its first ionization potential. As the last element in the actinide series, and similar to lutetium (Lu) as the last element in the lanthanide series, it was expected that Lr has a very low first ionization potential that is strongly influenced by relativistic effects.

However, Lr is only accessible atom-at-a-time in syntheses at heavy-ion accelerators, and only short-lived isotopes are known. Therefore, experimental investigations on Lr are very rare and have so far been limited to a few studies of some basic chemical properties.

In their new work, for which the international research collaboration exploited a novel combination and advancement of methods and techniques, the researchers report on the first and accurate measurement of the first ionization potential of Lr. For the experiment, the Institute of Nuclear Chemistry at Johannes Gutenberg University Mainz purified and prepared the exotic target material californium (element 98). The material was converted into a target in Japan and then exposed to a beam of boron ions (element 5).

The experiment was supplemented by theoretical calculations undertaken by scientists at the Helmholtz Institute Mainz (HIM) and at Tel Aviv University of Israel using the most up-to-date quantum chemical methods to quantify the ionization energy. The very good agreement between calculated and experimental result validates the quantum chemical calculations. The experimental technique opens up new perspectives for similar studies of yet more exotic, superheavy elements.

The new findings have been presented in the NATURE magazine.

Illustrations/photos:
http://www.uni-mainz.de/bilder_presse/09_kernchemie_lawrencium_01.jpg
The periodic table of elements including in the colored block at the bottom the lanthanides (Ln) and actinides (An). The height of each column indicates the relative first ionization potential of the corresponding element. The result obtained for lawrencium (Lr) is shown by the red column. The binding energy of the least bound valence electron in lawrencium is thus weaker than that in all other actinides and all other lanthanides.
Ill.: Kazuaki Tsukada, JAEA

http://www.uni-mainz.de/bilder_presse/09_kernchemie_lawrencium_02.jpg
The ionization energy of heavy lanthanides (black) and actinides (red) with the current result for lawrencium (Lr). The filled circle symbols represent values recorded in experiments, the ring symbols are estimated values. The two values for lawrencium are in excellent agreement, emphasizing the close correspondence between the theoretical expectations and experimental findings.
Ill.: Tetsuya K. Sato, JAEA

http://www.uni-mainz.de/bilder_presse/09_kernchemie_lawrencium_03.jpg
The gray tantalum tube surrounded by two heating elements in the center of the picture is part of the recently developed surface ion source installed in the JAEA-ISOL system in the JAEA tandem accelerator.
photo: Tetsuya K. Sato, JAEA

http://www.nature.com/news/exotic-atom-struggles-to-find-its-place-in-the-period… – NATURE article “Exotic atom struggles to find its place in the periodic table” on the original publication