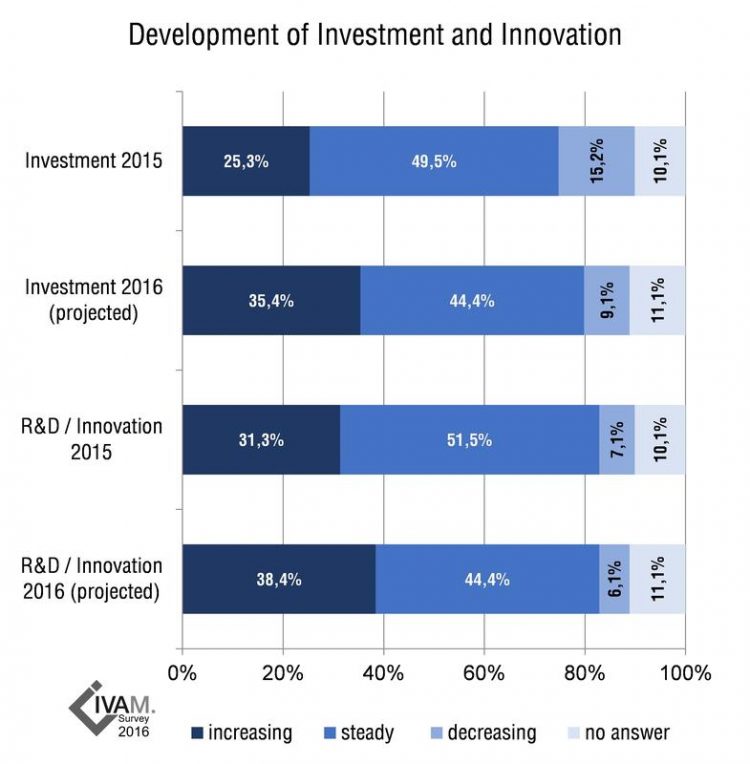 The level of investment in Europe is still significantly below the level of 2007, the period before the financial and economic crisis. The Juncker investment plan, which was installed in early 2015, and the European Central Bank’s step to cut the main interest rate and raise the deposit rate for dormant bank deposits in March 2016 are supposed to overcome the investment backlog.

Instead of relying on the effects of European monetary policy and easier loans, the microtechnology industry invests a lot of its own revenue. In 2015, 28 percent of companies have invested more than 20 percent of their turnover in research and development.

While in the whole of Europe the medical technology and healthcare industry continues to be the microtechnology industry’s major driver of innovation, in Germany the automotive industry has clearly outrun medical technology as top target market. The new energy policy and the demand for new drive concepts for electric mobility have obviously given a boost to innovation and created new business opportunities in the supplying industry.

What slows down the innovativeness of the European high-tech industry is the special status of some European countries. The partly associated status within the EU framework program Horizon 2020 to which the EU has downgraded Switzerland after the referendum on the mass immigration initiative in February 2014 negatively affects the R&D performance of high-tech companies and institutes throughout Europe, since joint research activities and projects are hampered.

The industry representatives fear further disadvantages for cooperation, innovation and, ultimately, the competitiveness of the European microtechnology industry, if the majority of the population of Great Britain opted for the country’s withdrawal from the EU in the referendum in June 2016.

The IVAM Microtechnology Network collects economic data of the microtechnology, MEMS, nanotechnology, advanced materials and optical/photonics industries once a year. In February 2016, more than 3,000 companies and research institutes in Europe have been asked about their economic situation and business strategy, the possible exit of Great Britain from the European Union, and the status of Switzerland in Europe.

All news from this category: Statistics

12.5 billion euros for non-university research in 2014