Six to ten million years ago: Ice-free summers at the North Pole 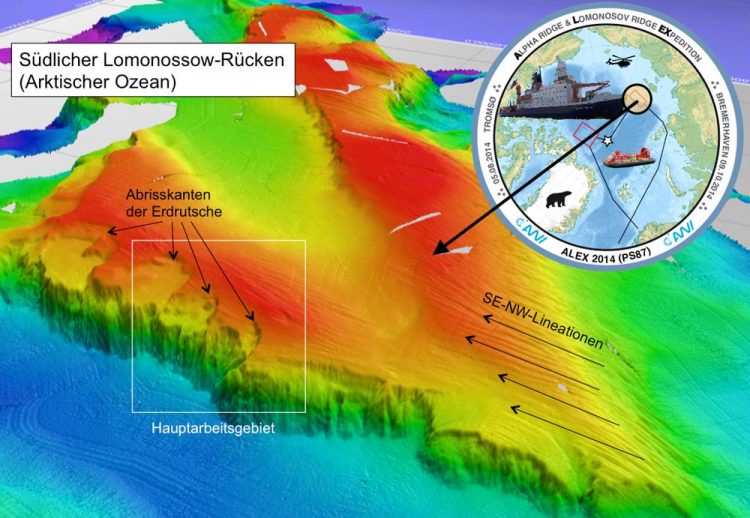 An international team of scientists led by the Alfred Wegener Institute Helmholtz Centre for Polar and Marine Research (AWI) have managed to open a new window into the climate history of the Arctic Ocean.

Using unique sediment samples from the Lomonosov Ridge, the researchers found that six to ten million years ago the central Arctic was completely ice-free during summer and sea-surface temperature reached values of 4 to 9 degrees Celsius.

In spring, autumn and winter, however, the ocean was covered by sea ice of variable extent, the scientists explain in the current issue of the journal Nature Communications. These new findings from the Arctic region provide new benchmarks for groundtruthing global climate reconstructions and modelling.

The researchers had recovered these unique sediment samples during a Polarstern expedition in summer of 2014. “The Arctic sea ice is a very critical and sensitive component in the global climate system. It is therefore important to better understand the processes controlling present and past changes in sea ice.

In this context, one of our expedition’s aims was to recover long sediment cores from the central Arctic, that can be used to reconstruct the history of the ocean's sea ice cover throughout the past 50 million years. Until recently, only a very few cores representing such old sediments were available, and, thus, our knowledge of the Arctic climate and sea ice cover several millions of year ago is still very limited,” Prof. Dr. Rüdiger Stein, AWI geologist, expedition leader and lead author of the study, explains.

The scientists found an ideal place for recovering the sediment cores on the western slope of the Lomonosov Ridge, a large undersea mountain range in the central Arctic.

“This slope must have experienced gigantic recurring landslides in the past, which resulted in the exhumation of more than 500-metre thick ancient sediment and rock formations. We were also surprised about the wide-spread occurrence of these slide scars, which extend over a length of more than 300 kilometres, almost from the North Pole to the southern end of the ridge on the Siberian side,” Rüdiger Stein explains.

Within a two-days coring action, he and his team took 18 sediment cores from this narrow area on Lomonosov Ridge on board the Polarstern research vessel. Although the recovered sediment cores were only four to eight metres long, one of them turned out to be precisely one of those climate archives that the scientists had been looking for a long time.

“With the help of certain microfossils, so-called dinoflagellates, we were able to unambiguously establish that the lower part of this core consists of approximately six to eight million-year-old sediments, thereby tracing its geological history back to the late Miocene. With the help of so-called ‘climate indicators or proxies’, this gave us the unique opportunity to reconstruct the climate conditions in the central Arctic Ocean for a time period for which only very vague and contradictory information was available,” says Rüdiger Stein.

Some scientists were of the opinion that the central Arctic Ocean was already covered with dense sea ice all year round six to ten million years ago – roughly to the same extent as today. The new research findings contradict this assumption. “Our data clearly indicate that six to ten million years ago, the North Pole and the entire central Arctic Ocean must in fact have been ice-free in the summer,” says Rüdiger Stein.

This statement is based on studies of organic compounds (so-called biomarkers) that were produced by certain organisms that lived in the Arctic Ocean at that time and that have been preserved in the sediment deposits. The researchers were able to extract two of such marker groups from the sediments:
“The first group of biomarkers is derived from carbonaceous algae that live in surface water, i.e. they need open water and, being plants, depend on light. Since in the central Arctic Ocean sunlight is only available during the spring and summer months and is pitch-dark at all other times, the data derived from these carbonaceous algae provide us with information about the surface water conditions during the summer period,” says Rüdiger Stein.

Furthermore, these carbonaceous algae produce different biomarker compounds depending on the water temperature. “These molecules allowed us to estimate that the surface water temperature of the Arctic Ocean was approximately 4 to 9 degrees Celsius in the late Miocene. Because these values are well above zero, this is a clear indication that ice-free conditions existed in the summer,” says the scientist.

However, as the second group of biomarkers shows, the Arctic Ocean was not ice-free all year round. It is formed by specific diatoms that live in the Arctic sea ice. Rüdiger Stein: “By combining our data records on surface water temperature and on sea ice, we are now able to prove for the first time that six to ten million years ago, the central Arctic Ocean was ice-free in the summer. In the spring and the preceding winter, on the other hand, the ocean was covered by sea ice. The seasonal ice cover around the North Pole must have been similar to that in the Arctic marginal seas today.”

These new findings of the Arctic Ocean climate history reconstructed from sediment data, are further corroborated by climate simulations, as was shown by the AWI modellers who participated in this study. This only applies, however, if we assume a relatively high carbon dioxide content in the atmosphere of 450 ppm. If the climate models were run using a significantly lower carbon dioxide content of about 280 ppm, as some studies postulate for the late Miocene, then an ice-free Arctic cannot be simulated. Whether the carbon dioxide content in the Miocene was indeed relatively high or whether the sensitivity of the model is too weak to simulate the magnitude of high-latitude warming in a warmer than modern climate, is currently subject to further international research. One of the overarching goals here is to improve the predictive capacity of climate models. Rüdiger Stein: “Once our climate models are capable of reliably reproducing surface-water temperature and sea ice cover of earlier periods, we will also be able to further improve the climate models for a better prediction of future climate change and sea ice conditions in the central Arctic Ocean, a major challenge for all of us for the coming years.”

Despite the outstanding results and the accompanying euphoria, the participating scientists agree that this was merely the first step and that other important steps must follow. “While our new sediment cores give us an undreamt-of initial insight into the early climate history of the Arctic, these climate records are still very incomplete. In order to fully unravel the great mystery of Arctic climate history over the past 20 to 60 million years, we need much longer, continuous sediment sequences, which can only be obtained by drilling. An Arctic drilling expedition (which is still a major scientific and technical challenge for the marine geosciences) is now planned for 2018 in our study area on the Lomonosov Ridge, and it will be carried out as part of the international drilling programme IODP (International Ocean Discovery Program). The preliminary investigations carried out by our Polarstern expedition have played a significant role in selecting the precise drilling locations,” Rüdiger Stein, who will be one of the expedition leaders of the IODP campaign in 2018, explains.

The Alfred Wegener Institute Helmholtz Centre for Polar and Marine Research (AWI) conducts research in the Arctic, Antarctic and oceans of the high and mid-latitudes. It coordinates polar research in Germany and provides major infrastructure to the international scientific community, such as the research icebreaker Polarstern and stations in the Arctic and Antarctica. The Alfred Wegener Institute is one of the 18 research centres of the Helmholtz Association, the largest scientific organisation in Germany.