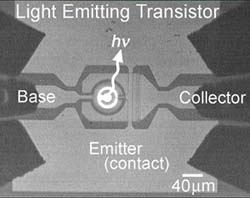 Put the inventor of the light-emitting diode and the maker of the world’s fastest transistor together in a research laboratory and what kinds of bright ideas might surface? One answer is a light-emitting transistor that could revolutionize the electronics industry.

Professors Nick Holonyak Jr. and Milton Feng at the University of Illinois at Urbana-Champaign have uncovered a light-emitting transistor that could make the transistor the fundamental element in optoelectronics as well as in electronics. The scientists report their discovery in the Jan. 5 issue of the journal Applied Physics Letters.

“We have demonstrated light emission from the base layer of a heterojunction bipolar transistor, and showed that the light intensity can be controlled by varying the base current,” said Holonyak, a John Bardeen Professor of Electrical and Computer Engineering and Physics at Illinois. Holonyak invented the first practical light-emitting diode and the first semiconductor laser to operate in the visible spectrum.

“This work is still in the early stage, so it is not yet possible to say what all the applications will be,” Holonyak said. “But a light-emitting transistor opens up a rich domain of integrated circuitry and high-speed signal processing that involves both electrical signals and optical signals.”

A transistor usually has two ports: one for input and one for output. “Our new device has three ports: an input, an electrical output and an optical output,” said Feng, the Holonyak Professor of Electrical and Computer Engineering at Illinois. “This means that we can interconnect optical and electrical signals for display or communication purposes.” Feng is credited with creating the world’s fastest bipolar transistor, a device that operates at a frequency of 509 gigahertz.

“In a bipolar device, there are two kinds of injected carriers: negatively charged electrons and positively charged holes,” Holonyak said. “Some of these carriers will recombine rapidly, supported by a base current that is essential for the normal transistor function.”

The recombination process in indium gallium phosphide and gallium arsenide materials also creates infrared photons, the “light” in the researchers’ light-emitting transistors. “In the past, this base current has been regarded as a waste current that generates unwanted heat,” Holonyak said. “We’ve shown that for a certain type of transistor, the base current creates light that can be modulated at transistor speed.”

Although the recombination process is the same as that which occurs in
light-emitting diodes, the photons in light-emitting transistors are generated under much higher speed conditions. So far, the researchers have demonstrated the modulation of light emission in phase with a base current in transistors operating at a frequency of 1 megahertz. Much higher speeds are considered certain.

“At such speeds, optical interconnects could replace electrical wiring between electronic components on a circuit board,” Feng said. This work could be the beginning of an era in which photons are directed around a chip in much the same fashion as electrons have been maneuvered on conventional chips.

“In retrospect, we could say the groundwork for this was laid more than 56 years ago with John Bardeen and Walter Brattain and their first germanium transistor,” said Holonyak, who was Bardeen’s first graduate student. “But the direct recombination involving a photon is weak in germanium materials, and John and Walter just wouldn’t have seen the light – even if they had looked. If John were alive and we showed him this device, he would have to have a big grin.”