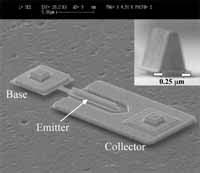 Researchers at the University of Illinois at Urbana-Champaign have broken their own record for the world’s fastest transistor. Their latest device, with a frequency of 509 gigahertz, is 57 gigahertz faster than their previous record holder and could find use in applications such as high-speed communications products, consumer electronics and electronic combat systems.

“The steady rise in the speed of bipolar transistors has relied largely on the vertical scaling of the epitaxial layer structure to reduce the carrier transit time,” said Milton Feng, the Holonyak Professor of Electrical and Computer Engineering at Illinois, whose team has been working on high-speed compound semiconductor transistors since 1995. “However, this comes at the cost of increasing the base-collector capacitance. To compensate for this unwanted effect, we have employed lateral scaling of both the emitter and the collector.”

Feng and graduate students Walid Hafez and Jie-Wei Lai fabricated the high-speed devices in the university’s Micro and Nanotechnology Laboratory. Unlike traditional transistors, which are built from silicon and germanium, the Illinois transistors are made from indium phosphide and indium gallium arsenide.

“This material system is inherently faster than silicon germanium, and can support a much higher current density,” Feng said. “By making the components smaller, the transistor can charge and discharge more quickly, creating a significant improvement in speed.”

During the past year, high-speed transistor records have fallen like dominoes on the Illinois campus. In January, Feng’s group announced a transistor with a 150-nanometer collector and a top frequency of 382 gigahertz. In May, the group reported a 452-gigahertz device with a 25-nanometer base and a 100-nanometer collector. Further scaling reduced the collector size to 75 nanometers, resulting in a 509-gigahertz device, announced last month.

In addition to using a high-speed material system and smaller device components, another technique the researchers employed to boost transistor speed utilized a narrow metal bridge to separate the base terminal from the device connector post.

“Normally in transistors the contact size is bigger than the transistor itself,” Feng said. “Our micro-bridge eliminates the parasitic base to collector capacitance that is inherent with designs that use large base contact posts. By isolating the base, we can achieve higher current density and faster device operation.”

Faster transistors would enable the creation of faster computers and video games, more flexible and secure wireless communications systems, and more rapid analog-to-digital conversion for use in radar and other electronic combat systems.

“Further vertical scaling of the epitaxial structure, combined with lateral device scaling, should allow devices with even higher frequencies,” Feng said. “Our ultimate goal is to make a terahertz transistor.”