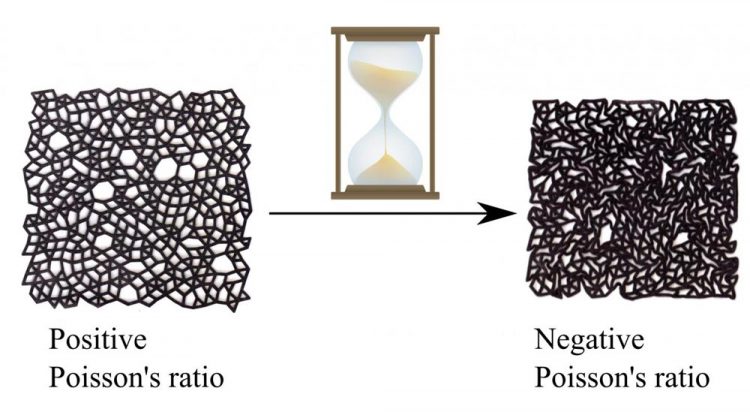 Researchers have shown that a material's natural aging process can be exploited to create materials with unusual properties. Credit: Nidhi Pashine

A new study published in Science Advances found that certain types of materials have a “memory” of how they were processed, stored, and manipulated. Researchers were then able to use this memory to control how a material ages and to encode specific properties that allow it to perform new functions. This creative approach for designing materials was the result of a collaboration between Penn's Andrea Liu and Sidney R. Nagel, Nidhi Pashine, and Daniel Hexner from the University of Chicago.

Liu and Nagel have worked together for many years on the physics of disordered systems. In contrast to ordered systems, which have systematic and repeating patterns, disordered systems are arranged randomly. An illustrative example is a natural wall made of tightly packed dirt, where individual grains aren't neatly stacked but instead clump together to form a rigid structure. Researchers are interested in these systems because their randomness allows them to be easily transformed into new mechanical metamaterials with unique mechanical properties.

One important property that materials scientists would like to control is how a material responds when an external force is applied. When most materials are stretched in one direction, they shrink perpendicularly, and when compressed they expand perpendicularly, like a rubber band–when it is stretched it becomes thin, and when compressed becomes thicker.

Materials that do the opposite, ones that shrink perpendicularly when compressed and become thicker when stretched, are known as auxetics. These materials are rare but are suspected to be better at absorbing energy and be more fracture-resistant. Researchers are interested in creating auxetic materials to help improve the function of materials that, among other things, could absorb shock.

In this study, the researchers wanted to see if they could use a disordered material's “memory” of the prior stresses it had encountered to transform the material into something new. First, they ran computer simulations of normal materials under pressure and selectively altered atomic bonds to see which changes could make the material auxetic. They discovered that, by cutting the bonds along the areas with the most external stress, they could digitally create an auxetic material.

Using this insight, the team then took a Styrofoam-like material and added “memory” by allowing the material to age under specified stresses. To make the material auxetic they applied a constant pressure to the material and let it age naturally. “With the whole thing under pressure, it adjusted itself. It turned itself from a normal material into a mechanical metamaterial,” says Liu.

This incredibly simple and effective process is a step closer towards a materials science “holy grail” of being able to create materials with specific atomic-level structures without the need for high-resolution equipment or atomic-level modifications. The approach described in this paper instead only requires a bit of patience while the system gains “memory” and then ages naturally.

Liu says that it is a “totally different” way to think about making new materials. “You start with a disordered system, and if you apply the right stresses you can make it come out with the properties you want,” she says.

This work also has a strong connection to structures in biology. Organs, enzymes, and filament networks are natural examples of disordered systems that are difficult to emulate synthetically because of their complexity. Now, researchers could use this simpler approach as a starting point to create complex human-made structures that take inspiration from the wide range of properties seen in biology.

Nagel is optimistic about the future. “In addition to making auxetic materials,” he says, “we have also used a computer to design in precise mechanical control of distant parts of the material by applying local stresses. This too is inspired by biological activity. We now need to see if this, too, can be made to work by aging a real material in the laboratory.”

“The possibilities at this stage seem limitless,” says Nagel. “Only by further theoretical work and experimentation will we begin to understand what are the limits to this new concept of material design.”