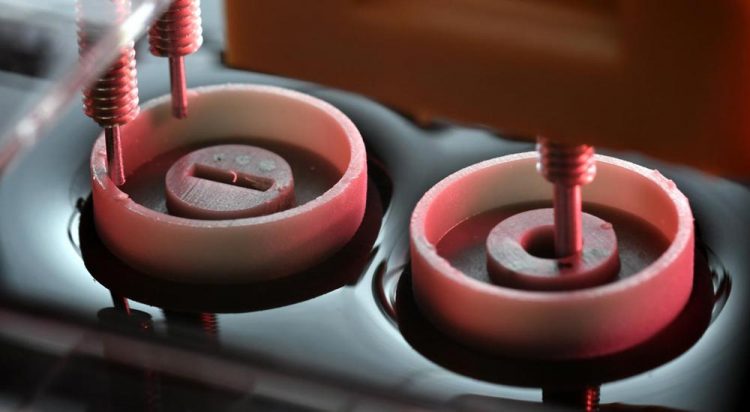 In a finding that could be useful in designing small aquatic robots, researchers have measured the forces that cause small objects to cluster together on the surface of a liquid -- a phenomenon known as the "Cheerios effect." The researchers used a custom built apparatus to measure the forces using magnetism. Credit: Harris Lab / Brown University

Now a team of Brown University researchers has developed a way to measure the forces involved in this type of clustering. It's the first time, the researchers say, that these forces have been experimentally measured in objects at the millimeter/centimeter scale.

And the implications of the work go far beyond cereal bowls — the results could be useful in guiding the self-assembly of micromachines or in designing microscale robots that operate in and around water.

“There have been a lot of models describing this Cheerios effect, but it's all been theoretical,” said Ian Ho, an undergraduate student at Brown and lead author of a paper describing the work.

“Despite the fact that this is something we see every day and it's important for things like self-assembly, no one had done any experimental measurements at this scale to validate these models. That's what we were able to do here.”

The research is published in Physical Review Letters. Ho's co-authors were Giuseppe Pucci, a visiting scholar at Brown, and Daniel Harris, an assistant professor in Brown's School of Engineering.

Their weight, however, does create a small dent in the surface film. When one Cheerio dent gets close enough to another, they fall into each other, merging their dents and eventually forming clusters on the milk's surface.

In order to test just how strongly Cheerios — and other objects in the Cheerio size and weight range — attract each other, the researchers used a custom-built apparatus that uses magnetism to measure forces. The experiment involves two Cheerio-sized plastic disks, one of which contains a small magnet, floating in a small tub of water.

Electrical coils surrounding the tub produce magnetic fields, which can pull the magnetized disk away while the other is held in place. By measuring the intensity of the magnetic field at the instant the disks begin moving away from each other, the researchers could determine the amount of attractive force.

“The magnetic field gave us a non-mechanical way of applying forces to these bodies,” Harris said. “That was important because the forces we're measuring are similar to the weight of a mosquito, so if we're physically touching these bodies we're going to interfere with the way they move.”

The experiments revealed that a traditional mathematical model of the interaction actually under-predicts the strength of the attraction when the disks are positioned very close together. At first the researchers weren't sure what was happening, until they noticed that as two disks draw closer, they start to tilt toward each other.

The tilt causes the disk to push harder against the surface of the liquid, which in turn increases the force by which the liquid pushes back. That extra push results in a slightly increased attractive force between the disks.

“We realized that there was one extra condition that our model wasn't satisfying, which was this tilt,” Harris said. “When we added that one ingredient to the model, we got much better agreement. That's the value of going back and forth between theory and experiment.”

The findings could be useful in the design of microscale machines and robots, the researchers say. There's interest, for example, in using small spider-like robots that can skitter across the surface of water to do environmental monitoring. This work sheds light on the kinds of forces these robots would encounter.

“If you have multiple little machines moving around or two or more legs of a robot, you need to know what forces they exert on each other,” Harris said. “It's an interesting area of research, and the fact that that we could contribute something new to it is exciting.”