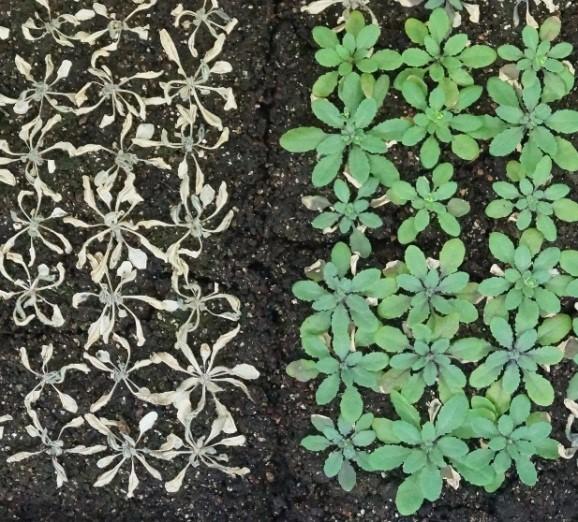 Regions all over the globe are suffering from severe drought, which threatens crop production worldwide. This is especially worrisome given the need to increase, not just maintain, crop yields to feed the increasing global population.

Over the course of evolution, plants have developed mechanisms to adapt to periods of inadequate water, and as any gardener can tell you, some species are better able to handle drought than others.

Accordingly, scientists have invested much effort to understand how plants respond to drought stress and what can be done to increase the drought tolerance of economically important plants. As Dr. Nam-Chon Paek of Seoul National University in Korea stated, 'We all expect that drought will be the major challenge for crop production in the near future.

Understanding drought-responsive signaling and the molecular and biochemical mechanisms of drought tolerance in model plants such as Arabidopsis and rice provide new insight into how to develop drought-tolerant crop plants through conventional breeding or biotechnological approaches.'

Arabidopsis thaliana was the first plant to have its genome sequenced. Paek is the senior author of a paper to be published this week in The Plant Cell that takes advantage of the genetic resources in this model species to reveal important underpinnings of drought responses in plants.

Paek's research group analyzed plants mutated in a regulatory gene called NAC016 and found that the nac016 mutant plants were more resistant to drought. The researchers set out to understand how this drought tolerance came about by comparing the set of expressed genes (the transcriptome) in the mutants to that in normal (so-called wild-type) plants.

According to Paek, 'Genome-wide transcriptome analysis using drought-tolerant or -susceptible variants is a promising method to reach the goal of understanding drought tolerance'. In this case, the scientists discovered that NAC016 is part of a mechanism to turn off responses to drought.

This is important because in the wild, plants likely evolved to keep the drought-response pathways inactive until needed so that they could save the energy the responses would require. For agricultural purposes, though, the ability to control when the pathway is on would be a great boon to developing drought-tolerant crops.