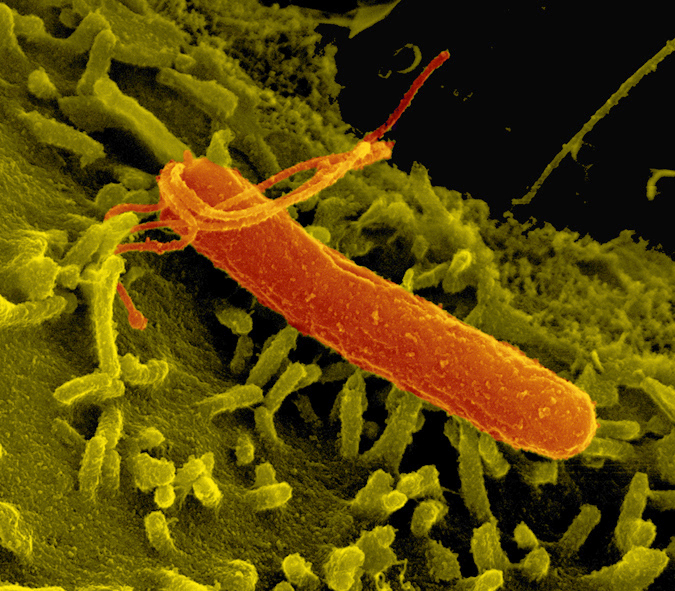 Around half of the global population is chronically infected with the stomach bacterium Helicobacter pylori, almost 1% of whom go on to develop gastric adenocarcinoma, one of the deadliest forms of cancer. Usually it takes many decades for the cancer to develop, making it difficult to pinpoint exactly how it is linked to an infection.

A team at the Max Planck Institute for Infection Biology in Berlin, Germany, has now analyzed the pattern of damage that occurs in the genome of gastric cells early after infection and found that not only does this pattern differ from those induced by other genotoxic agents, but that it resembles the characteristic changes later seen in gastric cancer.

While it has been widely accepted that this pathogen plays a role in the development of gastric cancer, these results represent an approach that can reveal a causality between a particular bacterial infection and the development of cancer in humans.

Several bacterial infections are now suspected to play a role in the development of cancer but for none is the link so conclusively proven as for H. pylori, which can induce chronic gastritis and ulcer disease, and ultimately lead to the development of cancer. Scientists have known for years that H. pylori damages host DNA, but it was not clear whether this occurred randomly.

The scientists from Berlin now found that while DNA damage induced by other means, such as irradiation or genotoxic chemicals, is indeed random, the damage caused by H. pylori is not.

The team around Thomas F. Meyer has been looking for tell-tale genetic fingerprints that might prove a causal connection between certain infections to cancer, and have now detected changes that look as if they may be just that. Their achievement was aided by the progress in international cancer sequencing programs, which revealed characteristic sets of mutations and genetic variations in different cancers.

They further utilized a new method developed in the lab to cultivate normal human stomach tissue. Previously scientists had to rely on cancerous cell lines to carry out such research, but the mutated genomes of these cells obscure early changes, which can be observed in still healthy cells.

First, the researchers found that the activity of several genes responsible for recognizing and repairing damaged DNA is turned down during the course of the infection. This leads to an increased risk of DNA damage, followed by attachment of a protein named yH2AX to the damaged stretches of DNA.

To capture the damaged sites in the human genome, the scientists isolated this protein and sequenced the DNA stretches attached to it. Comparing the damaged sites in normal cells before and after infection with H. pylori revealed that genes located close to the margins of the chromosomes, the so-called sub-telomeric regions, are more likely to be damaged after infection, as are genes that are active in gastric cells.

When they analyzed how well this pattern matches mutations found in different types of cancer, gastric carcinoma – or stomach cancer – was the one that looked most similar.

Interestingly, the only other cancer that showed a similar pattern was prostate cancer. The team around Thomas Meyer, together with Holger Brueggemann, now at Aarhus University in Denmark, has previously found an association between this type of cancer and another bacterium, Propionibacterium acnes. It thus seems possible that genetic fingerprints of infection may soon be able to provide more direct indications for the predicted role of certain bacterial pathogens in the cause of human cancers.