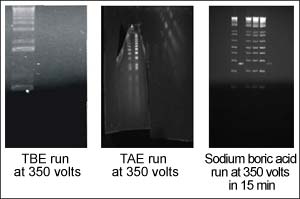 Reported in the February issue of BioTechniques, the scientists say that using the compound sodium boric acid in DNA electrophoresis may speed genetic discoveries. The scientists searched old literature and dozens of compounds to find one that could replace antiquated solutions used to conduct the electric current necessary to separate negatively charged DNA molecules, the building blocks of genetic code. In electrophoresis, DNA is fed through porous, jellylike slabs of sugar (also known as a ’DNA gel’) to reveal the outlines of the code, with small DNA molecules crawling up the gel faster than less mobile larger particles as the current passes through.

Like the two poles on a battery, the difference in the positive and negative charges represents a voltage. “DNA just needs to know it’s in a voltage and it will move,” says Scott Kern, M.D., professor of oncology and pathology at the Johns Hopkins Kimmel Cancer Center. “So, the most important feature of a solution in electrophoresis is its ability to carry a voltage.”

Solutions historically used for DNA electrophoresis are called Tris-acetic acid-disodium EDTA (TAE) and Tris-boric acid-disodium EDTA (TBE). For 30 years, scientists have mistakenly assumed these solutions were good conductors and ’buffers.’ Buffers serve to reduce acidity or pH and were used for protein electrophoresis in the 1950s. They are still used today and work well in protein electrophoresis because pH balance is important for separating proteins, which in their natural state carry an unpredictable charge.

However, Kern and postdoctoral fellow Jonathan Brody conducted experiments demonstrating that TBE and TAE provide only some buffering — which they say isn’t important anyway for DNA separation – and too much conductivity. “In fact, TBE and TAE essentially short-circuit DNA gels by creating too much current and heat.” Gels using TBE and TAE at high voltage are known to melt and distort DNA particle movement.

“Our work opened up the door to try different solutions,” says Brody. “But there was no theory to predict which compound would work better.”

After more than two months of trial and error experimentation, Brody settled on sodium boric acid. “It has great resolution at high voltages. I can now run a gel in 15 minutes using sodium borate as opposed to an hour and half with TBE or TAE,” says Brody. “It’s like switching from a dial-up modem to a high-speed Internet connection. You never want to go back.”

Cost per gel of sodium boric acid is $0.07 as compared with TAE $0.27 and TBE $0.67. The scientists estimate industry savings of $37 million annually based on the total market for DNA gels in the United States.

“In science, as in any other profession, to some extent, you accept what you’re taught and everybody was taught to use the same tools for extracting the components of DNA,” says Kern. “Scientists 30 years ago made no claim that these were the best tools, but when other scientists asked them what they used, they told them, and then, like a herd, everyone followed and accepted it.”

Kern and Brody have filed for a provisional patent on the sodium boric acid solution. They are entitled to royalty payments from and own equity in FasterBetterMedia, LLC, the company that is commercializing this product.