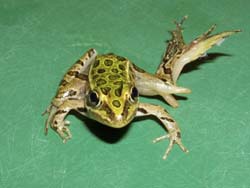 This infected Northern leopard frog (Rana pipiens), with two bony triangles and an extra foot in the left hind limb, is an example of the amphibian deformities studied by Pieter Johnson at the Center for Limnology. Johnson has recently authored a research paper showing that these malformations, along with the parasitic worm linked to them, have been found in lakes and ponds for over 50 years and represent an emerging disease within these wildlife populations. <br><br>Photo by: courtesy Pieter Johnson, Center for Limnology <br><br>

A historical examination of amphibian deformities – frogs with extra legs growing out of the abdomen, for example – suggests that these aberrations are not a new phenomenon, but part of an emerging disease that could jeopardize the survival of these organisms.

The research, described in the December issue of Conservation Biology, shows that while amphibian malformations and the parasitic worm that causes them have been found in lakes and ponds for more than 50 years, they have substantially increased in their abundance during this period.

Pieter Johnson, a University of Wisconsin-Madison graduate student in zoology and lead author of the recent paper, says that frog deformities have been a hot topic since the mid-1990s, when the abnormalities began to be widely observed. To date, severely malformed frogs, toads and salamanders have been found among 60 different species in nearly all U.S. states, as well as parts of Canada, Japan and several European countries.

The high number of amphibian deformities, explains Johnson, is of great ecological concern. Severe limb deformities cripple amphibians, making it difficult for them to catch food or escape predators. “We know that most malformed frogs die before sexual maturity,” says Johnson, adding that these malformations, coupled with other factors, could threaten entire populations of amphibians.

Keeping amphibians in lakes, ponds and other wetland environments is important for a number of reasons, explains Johnson. These organisms are integral to the food web – they gobble up a large number of insects and aquatic plants, and snakes, fish and birds eat them. They also serve as an indicator species – organisms scientists say can signal subtle changes in the environment.

“There’s the personal appeal, too. Kids have always been fascinated with frogs,” says Johnson.

Although sightings of deformed frogs are more common today, they have been reported by scientists, as well as the public, since as early as the 1940s, says Johnson, when some of the first cases were described in research journals or consumer publications.

Since then, researchers have searched for what causes the abnormalities. They have investigated everything from ultraviolet radiation to chemical contaminants to trematodes – parasitic flatworms that burrow into the hind legs of tadpoles.

The culprit for many of the deformities in amphibians turns out to be the tiny parasitic worms, says Johnson, adding that both field and lab studies show that the more abundant the parasite, the more frequent and severe the malformations.

Knowledge of this connection between parasites and deformities came in the early 1990s and coincided with frequent reports of frogs with missing or extra limbs. The timing, explains Johnson, led some scientists to question whether what they were observing resulted from some new phenomenon, or something that had always been present in the environment.

The answer, says the Wisconsin ecologist, could lead to a better understanding and, ultimately, improved management strategies for the apparent epidemic in amphibian populations.

To determine how “new” the deformities caused by trematodes were, Johnson and his colleagues stepped into libraries, museums and historic wetlands to find out if the parasitic worm was involved in the deformities reported decades ago. They focused on reports from 1946 to 1988 that described findings from nine historical “hot spots” in California, Colorado, Idaho, Mississippi, Montana, Ohio and Texas. Not only did they review this literature, but they also described the abnormalities in contemporary terms, dissected original specimens and resurveyed the original wetlands.

The main objectives, says Johnson, were to determine if the deformities reported back then are similar to the ones reported today, if trematodes were present in the preserved frogs and if those historical sites still are home to deformed frogs, as well as the deforming parasites.

Basically, he says, “we wanted to know how different what we’re seeing now is from what was observed historically.”

By and large, the majority of historical specimens had deformities in the hind legs, similar to what’s observed today. Nine specimens from one site, for example, had 40 extra hind limbs. The researchers also found that the parasitic flatworms had infected specimens from six of the historical sites, suggesting that amphibian malformations caused by trematodes have occurred since the 1940s.

When Johnson and his collaborators revisited these historic sites, they found that three wetlands continued to support the parasite and frogs with a high percentage (7 to 50 percent) of severe malformations, such as missing or extra limbs.

The finding of greatest significance, Johnson says, is in the increase in the number of lakes and ponds that support deformed frogs during this period. While fewer than one dozen of these sites are known from before 1990, Johnson says he and his colleagues have discovered more than 50 hot spots for amphibian malformations during the last seven years.

Based on this evidence, Johnson and his collaborators classify the frog and other amphibian deformities as an emerging disease, one that has substantially increased in occurrence, distribution and severity during the last 30 years.

By understanding the history of this disease in amphibians, Johnson says researchers can begin to pinpoint ecological changes over the years that are driving the emergence of more and more deformities in frogs, toads and salamanders. While some scientists are investigating changes in pollution or climate, Johnson is examining the role nutrient enrichment of water plays in promoting the trematode parasite and amphibian deformities.

All these factors being studied, Johnson hypothesizes, may come together, much in the same way that changes in the ecology of deer and mice, due to loss of predators and reforestation, led to the rise of Lyme disease.

“The ecological changes that drive disease emergence are often complex,” says Johnson, “but an understanding of such changes is critical toward preventing future epidemics in wildlife or in humans.”