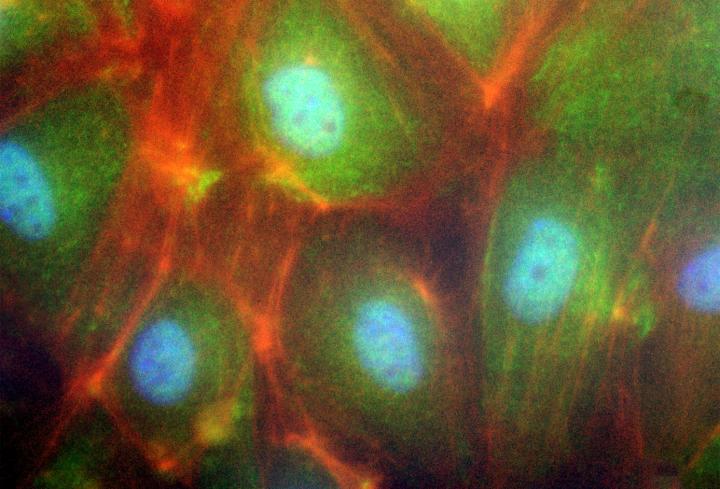 The image shows the immunofluorescence staining of human endothelial cells, with the cell nucleus in blue, certain cytoplasmic markers (constituents of the cytoskeleton) in red, and the protein hnRNPU in green.
Credit: (c) Herzzentrum UKB

Through their basic research, physicians at the Heart Center of the University Hospital Bonn have discovered how the communication between individual cells can be influenced with the help of a specific protein. These findings are an important approach to improving the treatment of diseases such as arteriosclerosis (calcified blood vessels), which causes heart attacks. The study was published online in advance in the Journal of Extracellular Vesicles, the printed version will be published shortly.

The human body consists of an inconceivably large number of cells. Current scientific studies assume around 40 trillion cells, depending on the weight and size of the person. Most cells come together to perform their function in the body in the best possible way. Collectively they form tissue, organs and muscles. The most important requirement for good cellular interaction is for the cells to communicate with each other as effectively as possible.

“In order for cells to communicate effectively with each other, they need a postman to carry information from one cell to the next,” explains Dr. Andreas Zietzer, cardiologist at the Heart Center of Bonn University Hospital. “This is precisely the role played by extracellular vesicles.” For a long time, these vesicles were considered to have little biological significance. It was assumed that the vesicles were only used to get rid of excess proteins and other molecules, making them a kind of cellular garbage disposal. However, it is now known that vesicles play a key role in intercellular communication.

Vesicles serve as postmen between the cells

The principle of the vesicles can be explained quite simply: They are released as extremely small membrane bubbles – only about two thousandths of a millimeter in size – by cells in our body and can then be taken up and utilized by other cells. Zietzer describes the crucial function of the vesicles “as postmen, they transport various contents and thereby enable the exchange of information between cells.”

In addition to proteins and lipids, this communication process also involves transporting ribonucleic acids (RNAs). These RNAs are copies of the genetic information and are required for carrying out its function. The physicians at the University of Bonn concentrated their research primarily on so-called microRNAs, which are responsible for fine tuning the switching on and off of genes.

“It would be a breakthrough for researchers and physicians if they could control which information is transported between cells and which is not,” says Zietzer, looking to the future. “However, precisely this kind of manipulation of cell-to-cell communication has so far been barely investigated.”

The research group, led by Dr. Andreas Zietzer, Dr. Rabiul Hosen and Dr. Felix Jansen (head of the research group), at the Heart Center of the University Hospital Bonn has now succeeded in using a new mechanism on human cells to clarify how the sorting of specific RNAs within the vesicles works. To this end, the researchers used a mass spectrometer to identify more than 3,000 proteins and 300 microRNAs that were found to be enclosed in the vesicles and ready for transport to other cells.

An RNA-binding protein holds back the mail

The three researchers were able to show that a specific RNA-binding protein (hnRNPU for short) retains the microRNAs in the donor cell like a sponge, thereby preventing them from being packed into vesicles and transported to another cell. The exact opposite is true when this particular protein is switched off: In this case there is an elevated release of the microRNAs, which are then increasingly packed into the vesicles.

“The RNA-binding protein hnRNPU therefore assumes the role of a gatekeeper, deciding which and how many microRNAs are released from the donor cell for transport to the recipient cell,” Andreas Zietzer summarizes the research results. This function enables the protein hnRNPU to significantly influence the communication between cells.

These observations hold great therapeutic potential; Zietzer, Hosen and Jansen were able to show that the transfer of certain microRNAs via the vesicles can be controlled by increasing or reducing the amount of hnRNPU in the donor cells. “This enables a targeted release, or retention, of microRNAs that promote regeneration and thereby positively or negatively influence the regenerative ability of diseased vascular cells,” comments Zietzer on the potential intervention in cellular communication. Medically, this is of high importance, as the regenerative ability of the vascular cells in calcified vessels (arteriosclerosis) is already limited in the early stages of the disease.

Zietzer, Hosen, and Jansen now hope to apply their findings on intercellular communication using extracellular vesicles: “It is, for instance, conceivable that the targeted local activation or deactivation of the protein hnRNPU in healthy parts of the vascular system might lead to a ‘swarm’ of regeneration-promoting vesicles to be dispatched, which could then be taken up by already damaged vascular areas and accelerate regeneration there. In critical situations, such as after a heart attack, this could promote the healing process of patients,” says Zietzer about the concrete benefit of this basic research.

Further applicability studies are in progress. The current research results suggest that this mechanism is also of great importance in the progression of heart and kidney diseases.

The costs for this research of approximately 300,000 euros were provided by the German Research Foundation, the German Cardiac Society, the Corona Foundation, and the Faculty of Medicine of the University of Bonn.

Additional press material with photos and graphics on the topic can be downloaded free of charge and in high resolution from this link: http://herzzentrum.ukbonn.host/presse/