A touch of gold sends crystals electric with excitement 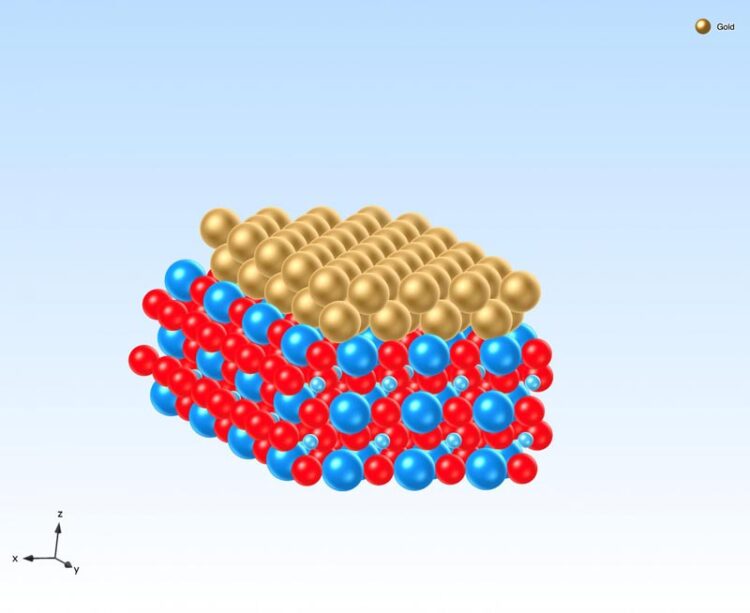 A touch of gold – or another noble metal – can change the structure of a crystal and its intrinsic properties, physicists at the University of Warwick have demonstrated in a display of modern-day alchemy

A touch of gold – or another noble metal – can change the structure of a crystal and its intrinsic properties, physicists at the University of Warwick have demonstrated in a display of modern-day alchemy.

Scientists at the University of Warwick have found a way to induce electric effects in crystals that they were not previously capable of, such as converting movement or heat into electricity, simply by adding a piece of metal to their surface.

Their method is detailed in a new paper published today (19 August) in Nature and demonstrates that the effects can be a greater magnitude than conventionally studied bulky materials making it ideal for use in technologies such as sensors, energy conversion and mobile technologies.

The key to the technique is in breaking the symmetry of the crystal’s structure. A crystal can be made from a number of different atoms, but the term describes an ordered structure of particles that form a symmetric pattern.

Professor Marin Alexe, co-lead author from the Department of Physics at the University of Warwick, said: “In physics, those materials are rather boring. From the point-of-view of functionality, symmetry is not the greatest thing you want to have. You want to break the symmetry in such a way that you would get new effects.”

The crystal can function as a semiconductor, allowing an electrical current to flow through it. By adding a small piece of metal to the crystal surface, the scientists created a junction known as a Schottky junction. This induces an electric field into the semiconductor that excites the semiconductor structure underneath the metal, breaking its symmetry and enabling new effects that were not previously possible.

Dr Mingmin Yang, who conducted the work at the University of Warwick and has since moved to the RIKEN institute in Japan, said: “Generally, the properties of these crystals are determined by two factors: the intrinsic properties of the elements that the crystal consists of, and how those elements are arranged to form that crystal, which we call its symmetry.

“Our research is demonstrating that how those elements are arranged is not just determined by their own nature, they can also be tuned by external influence. Once we use that influence to change their arrangement, they can exhibit properties that were previously prohibited to them. ”

The researchers used the noble metals gold and platinum to create their junction due to their high thermodynamic work function, but copper, silver, gold, iridium or platinum would also be good options. For the crystals, Strontium titanate, Titanium dioxide and silicon were used. None of these materials would normally show a piezoelectric or pyroelectric effect.

The observed effects give the technique great potential for use in sensors, which require high sensitivity, or in technologies relying on energy conversion. As a piezoelectric effect, the crystals can harvest energy, or work as an actuator or transducer. With the pyroelectric effect, they can work as a sensor or in infra-red imaging.

In addition, the small scale that this effect is seen on and its high efficiency would make it ideal for use in mobile technologies.

Professor Alexe added: “Materials with broken symmetry are rich in functionalities. To improve these functionalities, you usually need to tweak the material structure. This requires deploying complicated solid-state chemistry followed by detailed investigations.

“You now have a completely different path to tweak these materials and the ability to tune the effect, something that we have not been able to do before. That opens the field to many other possibilities with these materials and we might not know where those lead.”

For interviews or a copy of the paper contact: