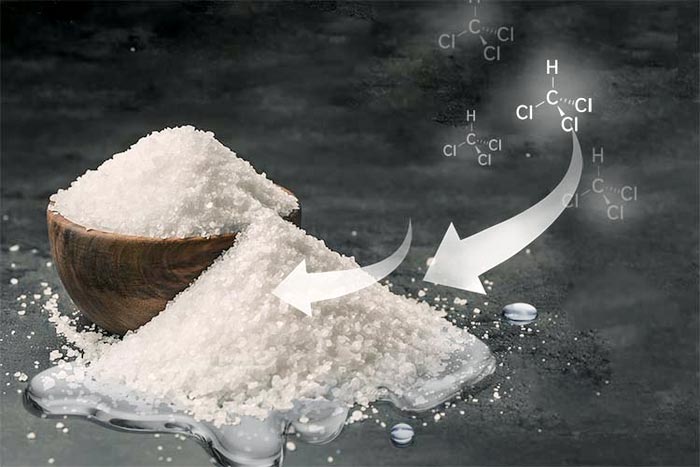 It has long been known that when salt is kept in a humid environment, it absorbs water, dissolving some of the salt and making it clump. Now, researchers from Japan have discovered that water vapor isn’t the only agent that can do this.

In a study published on July 29, 2022 in RSC Advances, researchers from the Institute of Industrial Science, The University of Tokyo, have revealed that organic vapors can trigger the dissolution of molecular salts in a way similar to water vapor.

This finding could have applications for cleaning up indoor pollutants. Volatile organic compounds (VOCs) are organic chemicals that exist as vapors at room temperature. The highest concentrations of VOCs are found indoors, and some are harmful to human health and the environment. These compounds can be removed by a number of methods, but to date, removal by a phenomenon known as organic deliquescence hasn’t been investigated.

“Deliquescence has been used to collect atmospheric water vapor, but to our knowledge, organic vapor-induced deliquescence hasn’t yet been reported,” says lead author of the study, Kazuyuki Ishii. “We investigated this phenomenon using several solid molecular salts that respond to organic vapors by undergoing solid to liquid changes.”

Deliquescence is the process by which a solid becomes a liquid as a result of absorbing enough moisture from the air to become dissolved in an aqueous solution. This has been reported for a number of chemicals, including calcium chloride (CaCl2), that spontaneously create aqueous solutions in humid conditions. Simply increasing the environmental humidity can induce deliquescence (observed as the solid to liquid change) for some water-soluble chemicals, without heating or adding liquid. CaCl2, for example, has been used as a chemical desiccant (i.e., a water-absorbent substance used to induce or maintain dryness).

“We used CaCl2 powder in a typical control experiment, in which it clearly changed to an aqueous solution via water vapor-induced deliquescence,” explains Kyoko Enomoto, senior author. “The changes we observed in molecular salts in the presence of an organic vapor were similar to the results of that control experiment under equivalent conditions.”

The researchers observed that the molecular salts changed from solid to liquid when chemicals such as chloroform (CHCl3) were used as organic solvents.

There is a pressing need to remove VOCs from indoor environments using organic solvents, particularly industrial facilities that use large amounts. On the basis of the efficacy of CaCl2 as a chemical desiccant for collecting atmospheric water vapor, the results of this study offer a promising method for developing agents to capture VOCs.

The video of Soft Crystals: https://www.youtube.com/watch?v=LXE3LeAk3N0

The video of Soft Crystals: https://www.youtube.com/watch?v=LXE3LeAk3N0

The Institute of Industrial Science, The University of Tokyo (UTokyo-IIS) is one of the largest university-attached research institutes in Japan. Over 120 research laboratories, each headed by a faculty member, comprise UTokyo-IIS, which has more than 1,200 members (approximately 400 staff and 800 students) actively engaged in education and research. Its activities cover almost all areas of engineering. Since its foundation in 1949, UTokyo-IIS has worked to bridge the huge gaps that exist between academic disciplines and real-world applications.