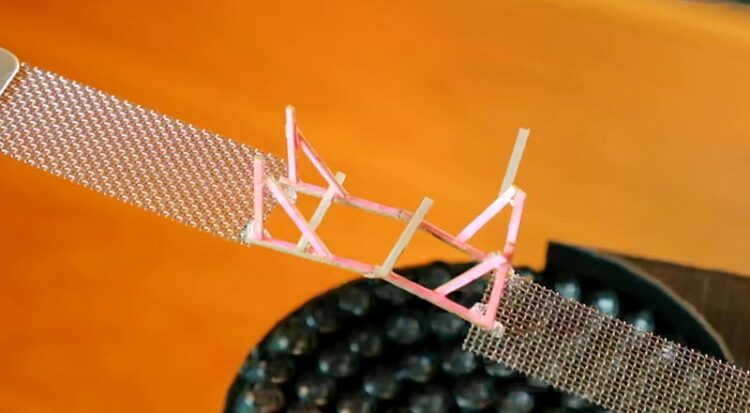 The work has been accepted at “SIGGRAPH”, the most important conference on computer graphics and interactive techniques.

“LeviPrint” is a system that uses acoustic manipulation for assembling objects without physical contact. We generate acoustic fields that trap small particles, glue droplets and, most importantly, elongated stick-like elements that can be manipulated and reoriented as we levitate them. In short, it is a fully functional system for manufacturing 3D structures using contactless manipulation.” This is how it was explained by researchers from the UPNA/NUP-Public University of Navarre Asier Marzo and Iñigo Ezcurdia, who together with Rafael Morales (Ultraleap Ltd, UK) and Marco Andrade (University of São Paulo, Brazil) are authors of the paper “LeviPrint: Contactless Fabrication using Full Acoustic Trapping of Elongated Parts”.

This research is due to be presented in August in Vancouver (Canada) at SIGGRAPH, the most important conference on computer graphics and interactive techniques where companies such as Nvidia, Disney Research and Facebook Reality Labs present their work.

As Asier Marzo, lead researcher and member of the UPNA/NUP’s Smart Cities Institute (ISC) pointed out, “we have designed a levitator combined with a robotic arm and a liquid dispenser to manufacture complex objects without contact”. Unlike regular assembly and manufacturing techniques, in which parts are in direct contact with the machine, acoustic manipulation has been used to position and orient parts without touching them during the assembly process. “We can manipulate small, brittle parts, as well as liquids or powders, thus making the processes more versatile. There is less cross-contamination, as the manipulator does not touch the material. Furthermore, it enables manufacturing techniques that cannot be achieved using traditional 3D printing, such as adding elements on top of existing parts or manufacturing inside closed containers from the outside,” said Iñigo Ezcurdia, PhD student and lead author of the research.

As they explained, “levitation of small particles and droplets had been achieved before, but no existing work has managed to trap in position and orientation elongated objects; this research allows using segments, sticks or beams for the fast and contactless manufacturing of robust, lightweight and complex structures”.

Some of the proposed techniques include the use of a glue that solidifies with ultraviolet light. Parts made only of glue can be manufactured, yet structures are usually made by assembling particles and elongated segments using this glue. For example, the system uses the acoustic levitator to trap a droplet of glue dispensed by a syringe. The droplet is levitated into the position where the next part will be added. The system picks up a segment or particle, positions it next to the previous ones in contact with the glue and uses ultraviolet light to dry the glue so that the new part is attached to the structure.

The ultrasonic field can pass through fabrics, meshes and other materials. For example, the researchers built a ship inside a bottle by levitating materials from the outside through a small opening. “If Leviprint was adapted to operate in aqueous media,” they pointed out, “it could assemble complex structures in cell culture media and perhaps even inside living beings”.

Pre-print of the work: https://bit.ly/3Oi3CtQ