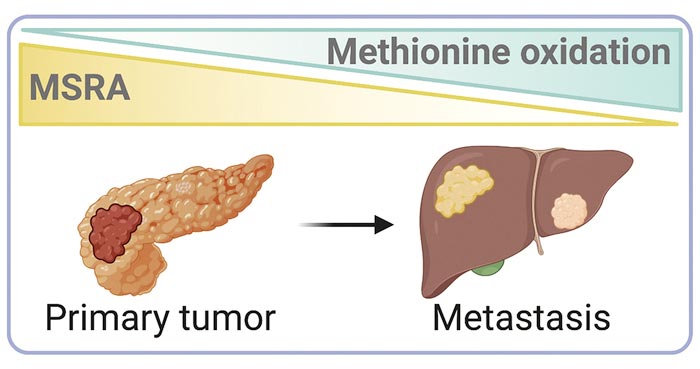 Pancreatic cancer, though rare, is one of the deadliest of cancers, killing nearly 50,000 people yearly and doing so quickly, primarily because it metastasizes rapidly through the body. Barely one in 10 people survive beyond five years.

But a discovery by chemists at the University of California, Berkeley, suggests a new way to slow or stop metastatic spread of pancreatic and perhaps other cancers.

In last week’s issue of the journal Molecular Cell, Christopher Chang and his group at UC Berkeley, collaborating with Christine Chio’s team at Columbia University in New York, report that metastasis is triggered by the loss of an enzyme that repairs oxygen damage to proteins.

Without this enzyme to erase the oxidative damage, one particular protein in cancer cells goes on to rev up energy production and seed new cancers around the body. The researchers confirmed this by knocking down levels of the “eraser” enzyme in mice and in cultured mouse and human cells, or organoids. In both cases, this promoted the migration of cancer cells and metastatic spread.

The researchers are now looking at other cancers to see if this new type of trigger is common and are pursuing ways to boost levels of the enzyme to prevent the metastatic spread of pancreatic cancer cells.

“We’re actually looking at trying to activate or boost an eraser, something that will reverse and bring you back to your normal state,” said Chang, the Class of 1942 Chair in the Department of Chemistry and professor of molecular and cell biology. “That’s a very difficult thing to do because most of the time, when you think about cancer, you think about inhibiting something that is elevated in the disease.”

The eraser enzyme normally fixes oxidative damage — the addition of an oxygen atom — to one specific amino acid component of proteins: methionine. Proteins are chains of amino acids — there are 20 types in all — that naturally fold into shapes that are critical to their function and activity. Chemical modification of any of these amino acids can affect both the shape and function of the protein, potentially activating or inactivating it.

“This is the first example of a methionine oxidation event that directly activates protein function to promote cell migration,” said Chio, an assistant professor of genetics and development at Columbia’s Herbert Irving Comprehensive Cancer Center.

Redox switches in cancer and aging

The protein impacted by methionine oxidation is called pyruvate kinase M2 (PKM2). Chang’s team profiled pancreatic cancer cells and found that oxidation of one of the many methionines on that protein triggered metastasis of pancreatic cancer cells. Looking more closely, they found that oxidation of that single methionine allowed the PKM2 protein to latch onto three others just like it to form a tetramer that supercharged the activity of energy-producing mitochondria in the cancer cells, making them migrate and seed new cancers.

“These are like Lego blocks that come on and off,” Chang said. “You can have one protein, which is a monomer; it can form a dimer when two come together; and then two more come together to make a tetramer. The tetramer is the strongest and most active, but usually it’s reversible because you can erase that oxygen. But they’re basically glued together when you have that methionine single oxygen atom modification.”

“We found that the MSRA protein — what we call the eraser protein — naturally removes methionine sulfoxides and makes them back into methionines,” Chang said. “But as pancreatic cancer progresses, it gets down-regulated, and so you basically lose your eraser to bring everything back to normal. Those cancer cells then increase their mitochondrial respiration and oxidative phosphorylation. What the cancer does is reprogram itself to keep growing and growing.”

The discovery of this oxidation-reduction, or redox, switch in pancreatic cancer suggests that similar switches may exist in other cancers.

“Our work identifies MSRA, an eraser of methionine oxidation, as a novel tumor suppressor that impedes metastatic dissemination,” Chio said. “By elucidating the fundamental aspects of MSRA function in pancreatic cancer, our findings lay the groundwork for redox-based targeted therapies to suppress the metastatic progression of pancreatic cancer and potentially other tumor types.”

Chang, who studies how protein modifications, like oxidation, affect their function, noted that methionine and another amino acid, cysteine, are unique in containing sulfur, which easily pairs with oxygen. As a result, the body needs specific enzymes to deoxygenate, or reduce, these two amino acids. Problems with these redox enzymes may be common, as in aging.

“More broadly, we’re searching for other types of diseases where this single atom signal could also play a role,” he said. “Once you lose the eraser, you basically have a bunch of extra marks on your proteome that are kind of written in ink, instead of in pencil.” 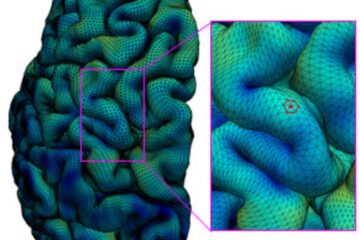 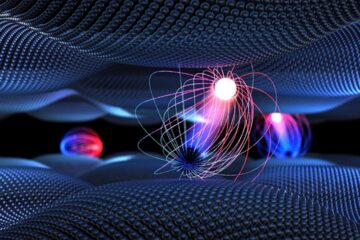