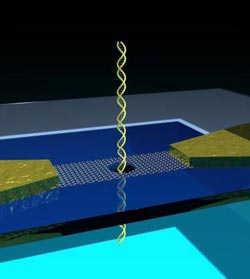 Many efforts over last decade have been directed towards development of single molecule sequencing based on solid state nanopores. Aleksandra Radenovic and co-workers have made a device composed of a graphene nanoribbon transistor built on top of a solid state nanopore. Direct electrical readout from the graphene transistors is used to detect DNA translocation events. Nanopore, DNA and the graphene nanoribbon are shown in this schematic (which is not to scale).<br><br>Credit: EPFL<br>

If we wanted to count the number of people in a crowd, we could make on the fly estimates, very likely to be imprecise, or we could ask each person to pass through a turnstile.

The latter resembles the model that EPFL researchers have used for creating a “DNA reader” that is able to detect the passage of individual DNA molecules through a tiny hole: a nanopore with integrated graphene transistor.

The DNA molecules are diluted in a solution containing ions and are driven by an electric field through a membrane with a nanopore. When the molecule goes through the orifice, it provokes a slight perturbation to the field, detectable not only by the modulations in ionic current but also by concomitant modulation in the graphene transistor current. Based on this information, it is possible to determine whether a DNA molecule has passed through the membrane or not.

This system is based on a method that has been known for over a dozen years. The original technique was not as reliable since it presented a number of shortcomings such as clogging pores and lack of precision, among others. “We thought that we would be able to solve these problems by creating a membrane as thin as possible while maintaining the orifice's strength”, said Aleksandra Radenovic from the Laboratory of Nanoscale Biology at EPFL.

Together with Floriano Traversi, postdoctoral student, and colleagues from the Laboratory of Nanoscale Electronics and Structures, she came across the material that turned out to be both the strongest and most resilient: graphene, which consists of a single layer of carbon molecules. The strips of graphene or nanoribbons used in the experiment were produced at EPFL, thanks to the work carried out at the Center for Micro Nanotechnology (CMI) and the Center for Electron Microscopy (CIME).

“Through an amazing coincidence, continued the researcher, the graphene layer's thickness measures 0.335 nm, which exactly fits the gap existing between two DNA bases, whereas in the materials used so far there was a 15 nm thickness.” As a result, while previously it was not possible to individually analyze the passage of DNA bases through these “long” tunnels – at a molecular scale –, the new method is likely to provide a much higher precision. Eventually, it could be used for DNA sequencing.

However they are not there yet. In only 5 milliseconds, up to 50'000 DNA bases can pass through the pores. The electric output signal is not clear enough for “reading” the live sequence of the DNA strand passage. “However, the possibility of detecting the passage of DNA with graphene nanoribbons is a breakthrough as well as a significant opportunity”, said Aleksandra Radenovic. She noted that, for example, the device is also able to detect the passage of other kinds of proteins and provide information on their size and/or shape.

This crucial step towards new methods of molecular analysis has received an ERC grant and is featured in an article published today in Nature Nanotechnology.