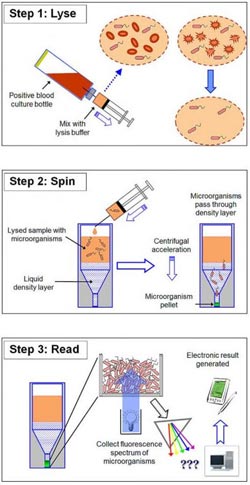 This is a graphic included with the press release.<br><br>Credit: John Walsh et al.<br>

The method combines a selective lysis step in which blood cells in the sample are destroyed, a centrifugation step to collect any bacteria or fungi in the sample, and a fluorescence step that analyzes the particular fingerprint of any pathogens present in the sample.

Tests show the method correctly identifies the species of bacteria or fungi in 96.5 % of positive blood culture samples, crucial information for doctors to provide the appropriate drugs for their patients.

“The primary benefit of getting a rapid identification is making sure the patient is on the right [antibiotic] therapy and to quickly make any needed adjustments to the initial therapy,” says co-author John Walsh of bioMérieux, Inc. in Durham, North Carolina. Patients with bloodstream infections are usually in very serious condition, says Walsh, and faster identification of the organism causing the infection can help get patients on the most effective antibiotics faster and save lives. Proper diagnosis is also important from the perspective of antibiotic stewardship: using more appropriate, targeted antibiotics reduces the risk of contributing to the spread of resistance to broad-spectrum antibiotics.

Walsh says the current standard approach to diagnosing bloodstream infections, Gram staining and overnight sub-culture followed by phenotypic ID tests, have limitations that can prevent timely treatment. Gram staining provides early, low level information about the type of microorganism present, but it sometimes takes hours to deliver a result, and technicians can make mistakes in the process that provide misleading results. Other more specific identification methods are also available for diagnosis, but they can take at least a day or two to produce results and many require expensive equipment.

In the technique developed by Walsh et al., a sample of positive blood culture is treated with lysis buffer to “pop” the blood cells, then transferred to a specialized optical tube. The tube is centrifuged, which drives bacteria or fungi, which are denser than the solution, down through a liquid density cushion to form a pellet at the bottom of the tube.

Then comes the intrinsic fluorescence spectroscopy (IFS): the microbial pellet is irradiated with light ranging from the deep ultraviolet to infrared, which excites certain organic molecules in the microorganisms, including tryptophan, NADH, FAD, porphyrins, and others, and causes them to fluoresce in a characteristic way depending on the identity of the microbe. The exact pattern of fluorescence is compared with a database of 37 of the most common known pathogens to identify the organism present.

“We're using intrinsic fluorescence to identify the microorganisms. It's an innate property of most living organisms. Because it's intrinsic, no reagents are needed for the identification step,” which removes many of the opportunities for mistakes and lowers test costs, says Walsh.

Testing in a controlled laboratory study shows the method can correctly identify the species in 96.5% of all test samples, and in the 2.7% of samples for which no species identity was provided, the system was able to correctly identify 67% to the family level, which is often enough information to select an effective therapy. Among over a thousand samples tested, the method never gave an incorrect result as to the family level or the Gram type.

Walsh says the research and development team in Durham is actively working on automating the system with robotics to make it a fully hands-off process. Blood cultures grow in their own time, often producing a positive result at an inconvenient time of the day for clinical labs, he points out, so automation could speed up diagnosis significantly.

“Our vision is to have a system that will automatically identify the blood culture isolate within 15 minutes of the culture being called positive,” says Walsh. If a culture is positive at 2 AM, he says, automating this method could make it possible to identify the organism by 2:15 AM and send an electronic report to a patient's physician. They hope be begin testing and evaluating the feasibility of an automated form of the system in a clinical environment within months.

Rapid ID Procedure: An overall schematic of the simple three-step process (lyse-spin-read) is given in Figures 1a-c. Briefly, a 2.0 mL sample of warm (35-37oC) positive broth is removed from the test blood culture bottle and added to 1.0 mL of warm (35-37oC) selective lysis buffer (0.45% w/v Brij-O10 in 0.3M CAPS, pH 11.7), contained in a 15 mL screw capped polypropylene tube. The mixture was vortexed for 5 seconds at maximum speed and then placed in a 35-37oC waterbath for 60 seconds. After an additional 1-2 second vortex, 1.0 mL of the lysate was removed and layered onto a single 5/16 inch diameter polypropylene ball (CIC Ball Co.) floating on the surface of 0.5 mL of a solution of 24% w/v cesium chloride + 0.005% w/v Pluronic F-108 + 10 mM HEPES, pH 7.4 contained within an optical micro-centrifuge tube. The polypropylene ball was used to control the layering process and create an undisturbed interface. The tube was sealed with a screw-cap and centrifuged for 2 minutes at 10,000 rpm at 20-25oC in a microcentrifuge with A-8-11 swing-out rotor.

mBio® is an open access online journal published by the American Society for Microbiology to make microbiology research broadly accessible. The focus of the journal is on rapid publication of cutting-edge research spanning the entire spectrum of microbiology and related fields. It can be found online at http://mbio.asm.org.

The American Society for Microbiology is the largest single life science society, composed of over 39,000 scientists and health professionals. ASM's mission is to advance the microbiological sciences as a vehicle for understanding life processes and to apply and communicate this knowledge for the improvement of health and environmental and economic well-being worldwide.