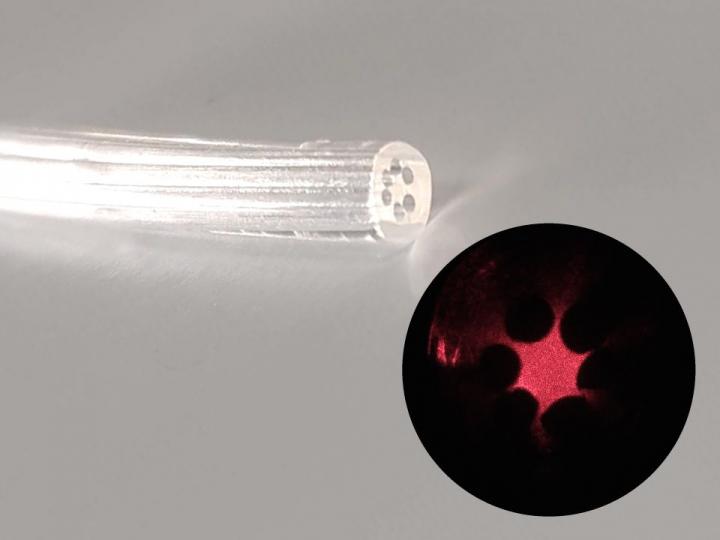 An optical fiber made of agar has been produced at the University of Campinas (UNICAMP) in the state of São Paulo, Brazil. This device is edible, biocompatible and biodegradable.

It can be used in vivo for body structure imaging, localized light delivery in phototherapy or optogenetics (e.g., stimulating neurons with light to study neural circuits in a living brain), and localized drug delivery.

Another possible application is the detection of microorganisms in specific organs, in which case the probe would be completely absorbed by the body after performing its function.

An article on the study is published) in Scientific Reports, an online journal owned by Springer Nature.

Agar, also called agar-agar, is a natural gelatin obtained from marine algae. Its composition consists of a mixture of two polysaccharides, agarose and agaropectin. “Our optical fiber is an agar cylinder with an external diameter of 2.5 millimeters [mm] and a regular inner arrangement of six 0.5 mm cylindrical airholes around a solid core. Light is confined owing to the difference between the refraction indices of the agar core and the airholes,” Fujiwara told.

“To produce the fiber, we poured food-grade agar into a mold with six internal rods placed lengthwise around the main axis,” he continued. “The gel distributes itself to fill the available space. After cooling, the rods are removed to form airholes, and the solidified waveguide is released from the mold. The refraction index and geometry of the fiber can be adapted by varying the composition of the agar solution and mold design, respectively.”

The researchers tested the fiber in different media, from air and water to ethanol and acetone, concluding that it is context-sensitive. “The fact that the gel undergoes structural changes in response to variations in temperature, humidity and pH makes the fiber suitable for optical sensing,” Fujiwara said.

Another promising application is its simultaneous use as an optical sensor and a growth medium for microorganisms. “In this case, the waveguide can be designed as a disposable sample unit containing the necessary nutrients. The immobilized cells in the device would be optically sensed, and the signal would be analyzed using a camera or spectrometer,” he said.