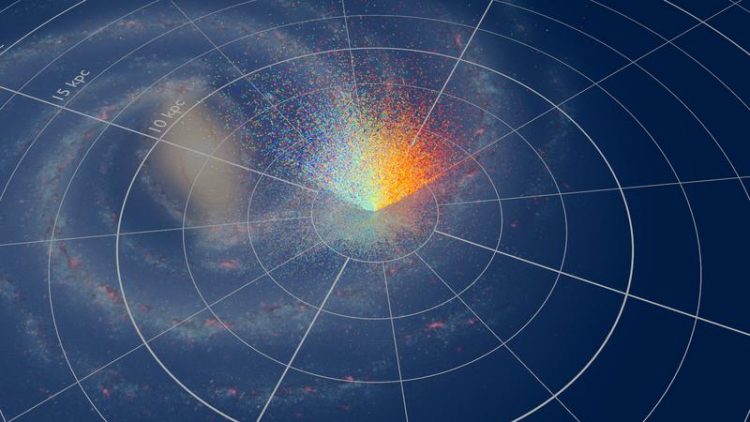 RAVE observed nearly half a million stars of our Galaxy. The Sun is located at the centre of the coordinate system. The colours represent radial velocities: red are receding stars and stars depicted in blue are approaching. AIP/K. Riebe, the RAVE Collaboration; Milky Way image (background): R. Hurt (SSC); NASA/JPL-Caltech

The RAdial Velocity Experiment RAVE is a spectroscopic survey of stars in the southern hemisphere. RAVE was designed to get a representative census of the movements and of the atmospheric properties of stars in the wider neighbourhood of the Sun.

By means of spectroscopy, the light of a star is decomposed into its rainbow colours. By analysing the spectra, the radial velocity of a star – the movement of the stars in the direction of the observer's view, can be determined.

Astronomers are not only used to think in long time scales – their projects also are often many-year endeavours. RAVE observed the sky for almost every clear night between 2003 and 2013 at the 1.2-metre UK Schmidt telescope of the Anglo-Australian Observatory in Siding Spring, Australia. RAVE utilized a dedicated fibre-optical setup to simultaneously take spectra of up to 150 stars in a single observation.

Only with this massive multiplexing such a large number of targets was achievable – the largest spectroscopic survey before RAVE featured only some 14,000 targets. In this way the survey obtained a representative sample of the stars around our Sun that are located roughly in a volume 15,000 light years across.

Over the past 15 years, an increasing number of stars and refined data products have been released. The final RAVE data release not only provides for the first time the spectra of all stars in the RAVE sample; the stars were also matched with stars from the DR2 catalogue of the satellite mission Gaia.

Thanks to the exquisite distances and proper motions measured by Gaia, considerably improved stellar temperatures, surface gravities and the chemical composition of the stellar atmospheres could be derived.

“The RAVE data releases have provided new insights into the motion of stars and chemical structure of our Milky Way,” says Matthias Steinmetz, leader of the RAVE collaboration and scientific chairman of the Leibniz Institute for Astrophysics Potsdam (AIP).

“The final data release concludes one of the first systematic spectroscopic Galactic Archaeology surveys. It’s really exciting to think about finishing this 15-year project. Thanks to RAVE, we have gained new insights into the structure and composition of our Milky Way. “

Some of the key results of RAVE include the determination of the minimum speed needed for a star to escape the gravitational pull of the Milky Way. The results confirmed that dark matter, an invisible component of the Universe of yet unknown nature, dominates the mass of our Galaxy.

With RAVE it could be shown that the Milky Way disk is asymmetric and wobbles owing to the interaction with spiral arms and the infall of satellite galaxies. RAVE also allowed for the identification of stellar streams in the solar environment. These streams of stars are the residues of torn apart old dwarf galaxies that have merged into our Milky Way in the past.

The chemical element abundances of the observed stars hold important clues to the chemical composition and the subsequent metal enrichment of the interstellar medium traced by stars of different ages and metallicities. With RAVE, astronomers efficiently searched for the very first stars, which are very metal-poor and give clues about the earliest epochs of star formation and the chemical evolution in the Milky Way.

The RAVE collaboration consists of researchers from over 20 institutions around the world and is coordinated by the AIP. More than 100 refereed scientific articles based on RAVE data were published since the first data release.