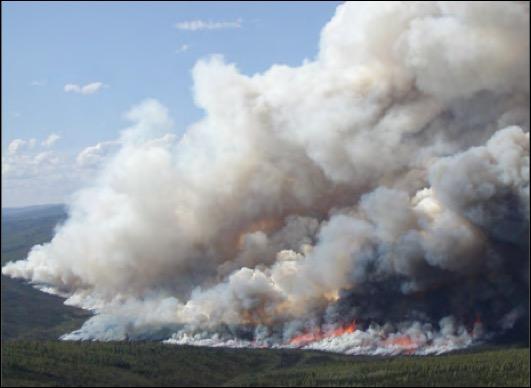 The 2020 Arctic wildfire season began two months early and was unprecedented in scope.

“It’s not just the amount of burned area that is alarming,” said Dr. Merritt Turetsky, a coauthor of the study who is a fire and permafrost ecologist at the University of Colorado Boulder. “There are other trends we noticed in the satellite data that tell us how the Arctic fire regime is changing and what this spells for our climate future.”

The scientists contend that input and expertise of Indigenous and other local and communities is essential to understanding and managing this global issue.

The commentary identifies two new features of recent Arctic fires. The first is the prevalence of holdover fires, also called zombie fires. Fire from a previous growing season can smolder in carbon-rich peat underground over the winter, then re-ignite on the surface as soon as the weather warms in spring.

“We know little about the consequences of holdover fires in the Arctic,” noted Turetsky, “except that they represent momentum in the climate system and can mean that severe fires in one year set the stage for more burning the next summer.”

The second feature is the new occurrence of fire in fire-resistant landscapes. As tundra in the far north becomes hotter and drier under the influence of a warmer climate, vegetation types not typically thought of as fuels are starting to catch fire: dwarf shrubs, sedges, grass, moss, even surface peats. Wet landscapes like bogs, fens, and marshes are also becoming vulnerable to burning.

The team has been tracking fire activity in the Russian Arctic in real time using a variety of satellite and remote sensing tools. While wildfires on permafrost in Siberia south of the Arctic are not uncommon, the team found that 2019 and 2020 stood out as extreme in the satellite record for burning that occurred well above the Arctic Circle, a region not normally known to support large wildfires.

As a result, said lead author Dr. Jessica McCarty, a geographer and fire scientist at Miami University, “Arctic fires are burning earlier and farther north, in landscapes previously thought to be fire resistant.”

The consequences of this new fire regime could be significant for the Arctic landscape and peoples and for the global climate. More than half of the fires detected in Siberia this year were north of the Arctic Circle on permafrost with a high percentage of ground ice. This type of permafrost locks in enormous amounts of carbon from ancient biomass. Climate models don’t account for the rapid thaw of these environments and resulting release of greenhouse gases, including methane.

On a more local level, abrupt thawing of ice-rich permafrost in wildfires causes subsidence, floods, pits and craters, and can submerge large areas under lakes and wetlands. As well as disrupting the lives and livelihoods of Arctic residents, these features are associated with more greenhouse gases moving from where they are trapped in soils into the atmosphere.

These extensive changes have severe consequences for global climate.

“Nearly all of this year’s fires inside the Arctic Circle have occurred on continuous permafrost, with over half of these burning on ancient carbon-rich peat soils,” said Dr. Thomas Smith, a fire scientist at the London School of Economics and Political Science and a coauthor of the study. “The record high temperatures and associated fires have the potential to turn this important carbon sink into a carbon source, driving further global heating.”

The severity of the 2020 Arctic fires emphasizes an urgent need to better understand a switch in Arctic fire regimes. New tools and approaches are required to measure how fires start and measure fire extent. Modeling tools and remote sensing data can help, but only if paired with local, specialized knowledge about where legacy carbon stored in peats or permafrost is vulnerable to burning and how environments change after wildfires.

The commentary cautions that this issue is so important to the climate system that it must be taken up as an issue of global importance. It outlines a path forward for not only understanding the role of changing fire in the Arctic but to ensure that research stays focused on local community and policy needs.

“We need global cooperation, investment, and action in monitoring fires, including learning from Indigenous and local communities how fire is traditionally used,” said McCarty. “We need new permafrost- and peat-sensitive approaches to wildland fire fighting to save the Arctic–there’s no time to lose.”