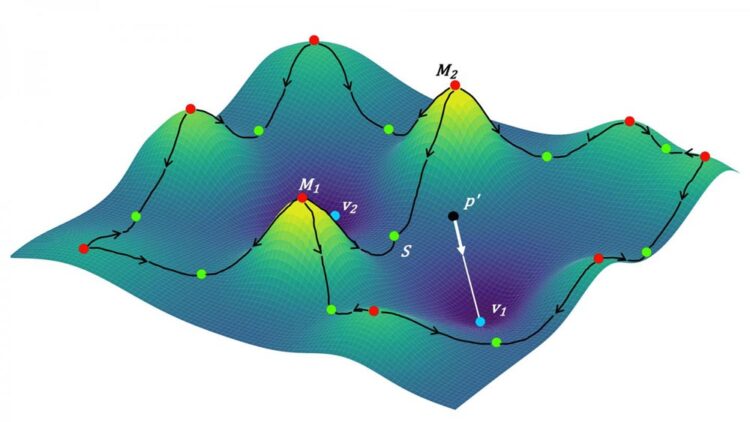 Cold Spring Harbor Laboratory researchers have built a virtual neuroanatomist that is far more accurate than previous AI programs built to trace neurons. One key step in the new technique is to map possible neurons onto a topological world. In this example, lines between hills represent likely connections.
Credit: Mitra lab/CSHL, 2020

Cold Spring Harbor Laboratory (CSHL) scientists have taught computers to recognize a neuron in microscope images of the brain more efficiently than any previous approach. The researchers improved the efficiency of automated methods for tracing neurons and their connections, a task that is increasingly in demand as researchers work to map the brain’s densely interconnected circuits. They did it by teaching the computer to recognize different parts of neurons, each of which have different characteristics.

Such connection maps are critical for learning how the brain processes information to generate thoughts and behavior. In recent years, new imaging technologies and an expanded capacity to store digital images have led to an enormous volume of data, capturing the paths of neurons as they wend their way through the brains of mice and other model organisms.

But there are not enough experts to analyze all those images, says CSHL Professor Partha Mitra, whose team developed the new artificial intelligence (AI) tool and reported on it in the journal Nature Machine Intelligence. Mitra says:

“I think of this project as building a virtual neuroanatomist. And the reason we need it is that the work that we’re doing has traditionally been done by expert humans who require, of course, decades of training. They have a tremendous amount of knowledge. They have looked at–I don’t know–hundreds of thousands of images. They understand the context. And they can offer expert judgment and interpretation.”

Automated methods must take over this work, Mitra says, but computers aren’t as good as humans at interpreting visual information. What an expert anatomist quickly recognizes as a single neuron meandering across a crowded microscope image is not as obvious to an algorithm–at least not without extensive training in which the computer is allowed to learn, over and over again, from large datasets.

“Modern machine learning techniques . . . are still not good enough. And what’s missing is that they often don’t have some of the prior knowledge or information that we as humans would have in making these judgments,” Mitra says. “So we need to build in some kind of prior information.”

The researchers did this using a form of mathematics called topological data analysis, a way to see things as 3D spaces with hills, valleys, and curves. Topology is sometimes called “‘rubber sheet geometry’ that emphasizes connectivity,” says Mitra, in contrast with the kind of geometry that relies on precise lengths and angles.

The researchers used simplified mathematical descriptions of the shapes of neuronal parts–plump cell bodies, slender axons, and branched dendrites. Neurons vary tremendously in their overall shapes, but by showing the computer how neurons connect using a few basic forms, the team significantly improved the program’s ability to detect axons and dendrites.

Mitra says, “automated image analysis will still require a human proofreader for the foreseeable future, to ensure quality in scientific applications–but by enhancing the computer’s accuracy, this new method significantly reduces the work that must be done by an expert.”

With the help of a new National Institutes of Health grant, Mitra’s group will develop their AI data analysis tools even more. These tools are critical to the U.S. Brain Initiative, of which his research is a part. He hopes this approach will untangle the mysteries of how brains connect so humans can think about how brains actually work.