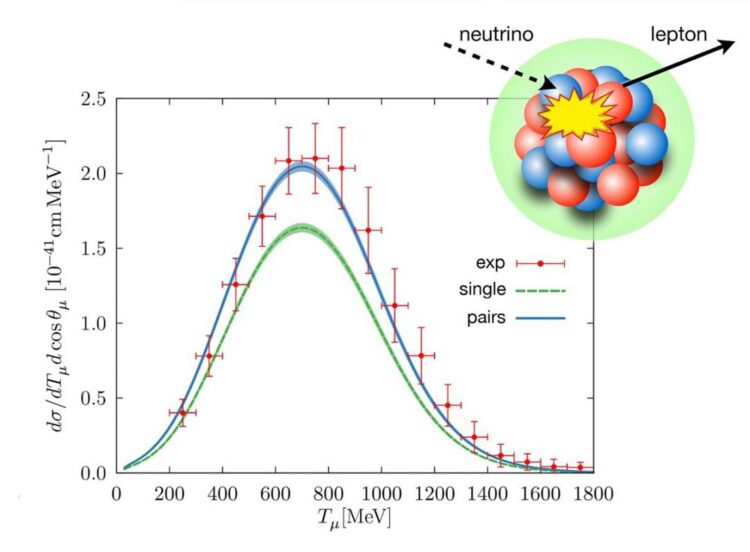 Cross sections of neutrino-nucleus interactions versus energy. Improved agreement between experiment and model calculations clearly shown for case of nucleon pair rather than single nucleon. Inset shows neutrino interacting with nucleus and ejecting a lepton.

Scientists often refer to the neutrino as the “ghost particle.” Neutrinos were one of the most abundant particles at the origin of the universe and remain so today. Fusion reactions in the sun produce vast armies of them, which pour down on the Earth every day. Trillions pass through our bodies every second, then fly through the Earth as though it were not there.

“While first postulated almost a century ago and first detected 65 years ago, neutrinos remain shrouded in mystery because of their reluctance to interact with matter,” said Alessandro Lovato, a nuclear physicist at the U.S. Department of Energy’s (DOE) Argonne National Laboratory.

“Our team came into the picture because these experiments require a very accurate model of the interactions of neutrinos with the detector nuclei over a large energy range.” — Noemi Rocco, postdoc, Argonne Physics division and Fermilab.

Lovato is a member of a research team from four national laboratories that has constructed a model to address one of the many mysteries about neutrinos — how they interact with atomic nuclei, complicated systems made of protons and neutrons (“nucleons”) bound together by the strong force. This knowledge is essential to unravel an even bigger mystery — why during their journey through space or matter neutrinos magically morph from one into another of three possible types or “flavors.”

To study these oscillations, two sets of experiments have been undertaken at DOE‘s Fermi National Accelerator Laboratory (MiniBooNE and NOvA). In these experiments, scientists generate an intense stream of neutrinos in a particle accelerator, then send them into particle detectors over a long period of time (MiniBooNE) or five hundred miles from the source (NOvA).

Knowing the original distribution of neutrino flavors, the experimentalists then gather data related to the interactions of the neutrinos with the atomic nuclei in the detectors. From that information, they can calculate any changes in the neutrino flavors over time or distance. In the case of the MiniBooNE and NOvA detectors, the nuclei are from the isotope carbon-12, which has six protons and six neutrons.

“Our team came into the picture because these experiments require a very accurate model of the interactions of neutrinos with the detector nuclei over a large energy range,” said Noemi Rocco, a postdoc in Argonne’s Physics division and Fermilab. Given the elusiveness of neutrinos, achieving a comprehensive description of these reactions is a formidable challenge.

The team’s nuclear physics model of neutrino interactions with a single nucleon and a pair of them is the most accurate so far. “Ours is the first approach to model these interactions at such a microscopic level,” said Rocco. “Earlier approaches were not so fine grained.”

One of the team’s important findings, based on calculations carried out on the now-retired Mira supercomputer at the Argonne Leadership Computing Facility (ALCF), was that the nucleon pair interaction is crucial to model neutrino interactions with nuclei accurately. The ALCF is a DOE Office of Science User Facility.

“The larger the nuclei in the detector, the greater the likelihood the neutrinos will interact with them,” said Lovato. “In the future, we plan to extend our model to data from bigger nuclei, namely, those of oxygen and argon, in support of experiments planned in Japan and the U.S.”

Rocco added that “For those calculations, we will rely on even more powerful ALCF computers, the existing Theta system and upcoming exascale machine, Aurora.”

Scientists hope that, eventually, a complete picture will emerge of flavor oscillations for both neutrinos and their antiparticles, called “antineutrinos.” That knowledge may shed light on why the universe is built from matter instead of antimatter — one of the fundamental questions about the universe.

The present research is supported by the DOE Office of Science. The team received ALCF computing time through DOE‘s Innovative and Novel Computational Impact on Theory and Experiment (INCITE) program.

The Argonne Leadership Computing Facility provides supercomputing capabilities to the scientific and engineering community to advance fundamental discovery and understanding in a broad range of disciplines. Supported by the U.S. Department of Energy’s (DOE‘s) Office of Science, Advanced Scientific Computing Research (ASCR) program, the ALCF is one of two DOE Leadership Computing Facilities in the nation dedicated to open science.