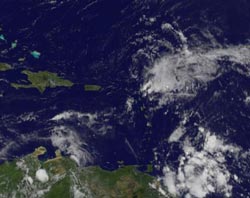 His center was located 130 miles north-northeast of the northern Leeward Islands, near latitude 19.8 North and longitude 62.0 West. Tropical Depression Henri is moving toward the west near 13 mph and he's expected to slow down in the next day. Minimum central pressure is near 1010 millibars.

The Geostationary Operational Environmental Satellite known as GOES-12 covers the Atlantic Ocean, and is managed by the National Oceanic and Atmospheric Administration (NOAA). NASA's GOES Project, located at NASA's Goddard Space Flight Center, Greenbelt, Md. creates some of the GOES satellite images. An image created on October 8 at 10:45 a.m. EDT showed Henri as a disorganized area of cloudiness, located east of the Leeward Islands.

While on his westward track, Henri is expected to produce between 1 and 2 inches of rainfall over the northern Leeward Islands and the Virgin Islands.

Henri is likely to degenerate into a remnant low later today because he's in an environment of battering winds. Henri will remain in an environment of strong southwesterly shear today, and later winds from the northeast will hammer away at him, further weakening his circulation.