Bizarre parasite from the Jurassic 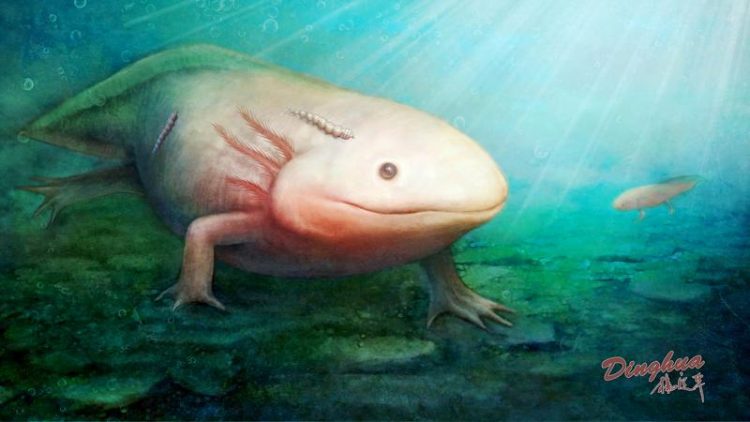 Salamanders served as hosts: This reconstruction shows how scientists think the fly larvae adhered to the skin of the amphibian. Graphic: Yang Dinghua, Nanjing

With it, the animal could adhere to salamanders and suck their blood with its mouthparts formed like a sting. To date no insect is known that is equipped with a similar specialised design. The international scientific team is now presenting its findings in the journal “eLIFE”.

The parasite, an elongate fly larva around two centimeters long, had undergone extreme changes over the course of evolution: The head is tiny in comparison to the body, tube-shaped with piercer-like mouthparts at the front. The mid-body (thorax) has been completely transformed underneath into a gigantic sucking plate; the hind-body (abdomen) has caterpillar-like legs.

The international research team believes that this unusual animal is a parasite which lived in a landscape with volcanoes and lakes what is now northeastern China around 165 million years ago. In this fresh water habitat, the parasite crawled onto passing salamanders, attached itself with its sucking plate, and penetrated the thin skin of the amphibians in order to suck blood from them.

“The parasite lived the life of Reilly“, says Prof. Jes Rust from the Steinmann Institute for Geology, Mineralogy and Palaeontology of the University of Bonn. This is because there were many salamanders in the lakes, as fossil finds at the same location near Ningcheng in Inner Mongolia (China) have shown.

“There scientists had also found around 300,000 diverse and exceptionally preserved fossil insects”, reports the Chinese scientist Dr. Bo Wang, who is researching in palaeontology at the University of Bonn as a PostDoc with sponsorship provided by the Alexander von Humboldt Foundation. The spectacular fly larva, which has received the scientific name of “Qiyia jurassica”, however, was a quite unexpected find. “Qiyia” in Chinese means “bizarre”; “jurassica” refers to the Jurassic period to which the fossils belong.

“No insect exists today with a comparable body shape”, says Dr Bo Wang. That the bizarre larva from the Jurassic has remained so well-preserved to the present day is partly due to the fine-grained mudstone in which the animals were embedded. “The finer the sediment, the better the details are reproduced in the fossils”, explains Dr Torsten Wappler of the Steinmann-Institut of the University of Bonn. The conditions in the groundwater also prevented decomposition by bacteria.

Astonishingly, no fossil fish are found in the freshwater lakes of this Jurassic epoch in China. “On the other hand, there are almost unlimited finds of fossilised salamanders, which were found by the thousand“, says Dr Bo Wang. This unusual ecology could explain why the bizarre parasites survived in the lakes: fish are predators of fly larvae and usually hold them in check. “The extreme adaptations in the design of Qiyia jurassica show the extent to which organisms can specialise in the course of evolution”, says Prof. Rust.

As unpleasant as the parasites were for the salamanders, their deaths were not caused by the fly larvae. “A parasite only sometimes kills its host when it has achieved its goal, for example, reproduction or feeding “, Dr Wappler explains. If Qiyia jurassica had passed through the larval stage, it would have grown into an adult insect after completing metamorphosis. The scientists don't yet have enough information to speculate as to what the adult it would have looked like, and how it might have lived.