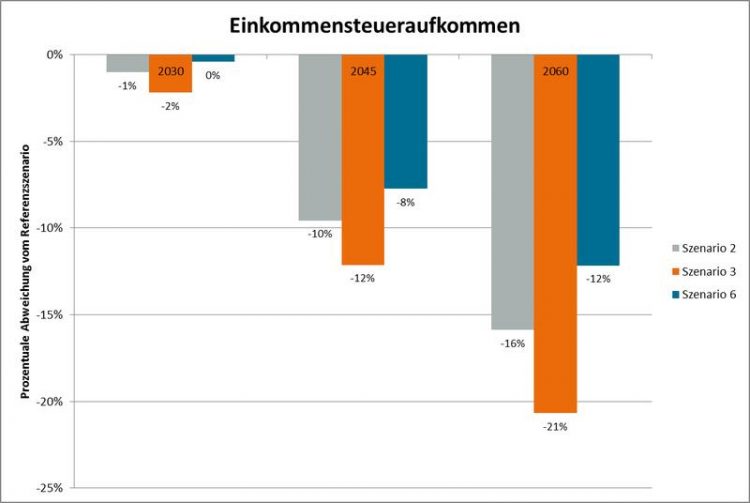 In the next decades, population aging in Germany will accelerate and also induce a decline of the total population. These demographic changes can be expected to have a profound impact on the governmental budget.

While changes in public expenditures have been forecasted regularly since 2005, the revenue side has received less attention to date. A new study by the Fraunhofer Institute for Applied Information Technology FIT and the Prognos AG sheds light on the impact of demographic change on the future development of tax revenues.

The study focuses on the development of income tax revenues given a shrinking working population, but also considers sales tax revenues, which account for a similarly large share of total tax revenues.

Fraunhofer FIT quantifies income tax revenues in the years 2030, 2045 and 2060 using simulation models based on microeconomic data. Starting from a scenario without any demographic changes, the study distinguishes three possible paths for the development of the population in Germany. These correspond to the variants 2 (continuity), 3 (relatively old population) and 6 (relatively young population) of the official forecast of the Federal Statistical Office.

The income tax balance of this “deferred taxation” is negative and the problem is aggravated by demographic change. Due to expected increases in real incomes, however, demographic change does not imply an absolute drop in income and sales tax revenues in the next decades.