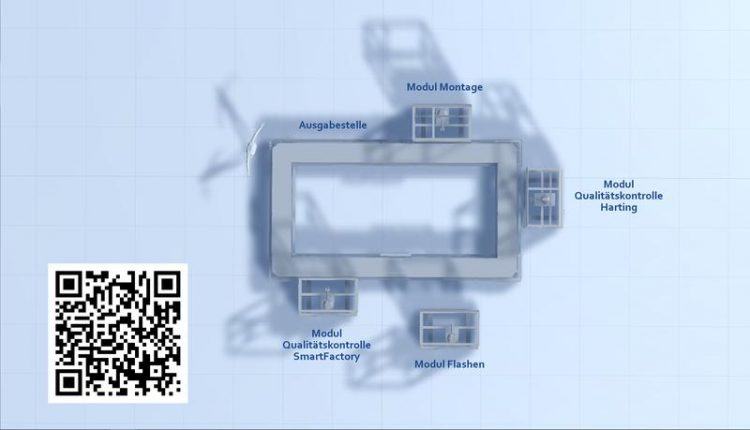 “Our second demonstrator, which is completely new in many respects, is to be on display at HM 2020,” said Prof. Martin Ruskowski, Chairman of the Executive Board at SmartFactory-KL and Head of Research Department Innovative Factory Stsystems at DFKI “In the final months of the exciting run-up to the Hanover Fair, the devil is in the detail.

But I am confident of our success thanks to the constructive efforts of our active association members from research and industry,” Ruskowski added. Fellow Executive Board member Andreas Huhmann said: “Experts from 11 companies come together in three working groups in what is a unique and motivating process to develop new engineering technologies. The professionals at SmartFactory-KL are also participating.”

SmartFactory-KL first coined the term Production Level 4 in 2019 to describe the autonomous production of tomorrow. “The new demonstrator represents the technical implementation of our current research and development results.

It benefits from the flow of our experience and the knowledge gained in the construction and operation of the first Industrie 4.0 demonstrator,” said Ruskowski. Mr. Huhmann added:

“It is important that we do not get stuck in old ways of thinking. Production Level 4 allows us to approach the needs of industry with open ears.” Experience has shown that the data, computing capacity, and AI methods needed to realize the new vision of future production have only recently become available.

Production Level 4 is an update of Industrie 4.0

Production Level 4 integrates IT, automation, and people, all equally. “We often observe a reflexive implementation of automation,” said Ruskowski. “But that can take workers fully out of production and that is a mistake.” The diverse and creative abilities of a human being – such presumably simple abilities like empathy, ethics, or an understanding of time and space – can never be replaced by machines or AI methods. Production Level 4 is the result of consistent further development of Industrie 4.0.

The new demonstrator exhibits the first steps towards Production Level 4

“We developed a modular system architecture in Kaiserslautern that is both scalable and expandable,” said Ruskowski in describing the second demonstrator. “We are able to show how system components are easily exchanged in our manufacturer-independent eco-system.” One of the quality control components is built by SmartFactoryKL, while another is supplied by association member company Harting GmbH. “The demonstrator is designed to permit further development each year so that in five years, we achieve the planned Production Level 4,” explained Professor Ruskowski. “The culmination of our know-how and our skills occurs here. Each year at the Hanover Fair, we use the production plant to show what has become technically feasible,” said Ruskowski.

SmartFactory-KL presents a new production plant for USB memory sticks in a studded brick (“noppenstein”) form at the Fair this year. The product is merely a placeholder. The focus is on the production processes and the differentiation of products via the software. The individual production steps are transferable to any possible application.
The visitor can configure an individual USB studded brick memory stick using a touch screen. Once an order is placed, the processing begins. First, the studded bricks are assembled in the first production station. If the customer wants to place an image on the USB sticks, the second station is a quality control component. After that, a data recharge takes place in a third production module, followed by a further quality control with a camera and AI applications in the fourth production station. The quality controls compare the job order with the finished USB memory stick. Then, if is all is good, the product is released.
The production stations are grouped in a central conveyor system, which moves the products from station to station.

Planning calls for the use case to be linked with the EU's announced cloud service Gaia-X. Also under consideration is a joint venture with SmartFactoryEU member companies on equal terms.

The research institutes FlandersMake/Belgium, Brainpoort Industries/The Netherlands, and SmartFactoryKL/Germany established SmartFactory-EU EEIG on September 26, 2019. The extension EEIG indicates the business form of the association is based on EU law.
The new European association will have its headquarters in Kaiserslautern, with Prof. Dr. Detlef Zühlke appointed as founding director. The aim is to place the numerous activities of the member states under one roof to strengthen Europe's position on the world market.
The Official Inaugural Ceremony takes place during the Hanover Fair, exact date and time to be announced.