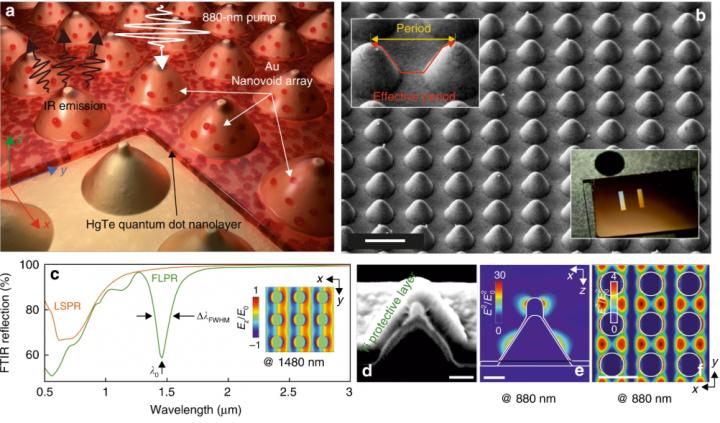 Fig. 1: Laser-printed plasmonic nanobump array for enhancement of the spontaneous emission rate of IR-emitting QDs. a Artistic representation of the HgTe QD layer coated above the laser-printed Au nanobump array. b Side-view (view angle of 45°) SEM image showing the Au nanobump array printed at a 1-μm pitch (scale bar corresponds to 1 µm). A close-up SEM image on the top inset demonstrates the difference between the period and the “effective” period of the nanobump array. The bottom inset shows a photograph of two large-scale (3 × 9 mm2) nanobump arrays produced on the glass-supported Au film. c Typical Fourier transform infrared (FTIR) reflection spectrum of the plasmonic nanobump array printed at a 1 µm pitch (green curve). The contribution of the localized surface plasmon resonance (LSPR) of the isolated nanobumps of a given shape is shown by the orange dashed curve. FLPR denotes the first-order lattice plasmon resonance. The inset provides the distribution of the z-component of the EM field (Ez/E0) calculated 50 nm above the smooth Au film surface at 1480 nm wavelength. Circles indicate the nanobump positions. The details related to the calculations of the LSPRs and FLPRs are provided in the Supporting Information. d Side-view (view angle of 70°) SEM image of the cross-section of the nanobump (scale bar is 200 nm). e, f Calculated EM-field intensity distribution (E2/E02) near the isolated nanobump (in the xz plane) and 50 nm above the smooth Au film level (in the xy plane) at an 880 nm pump wavelength (scale bars in e, f are 200, 1000 nm, respectively) Credit: FEFU press office

FEFU scientists, together with colleagues from the Far Eastern Branch of the Russian Academy of Sciences and foreign experts, designed a resonant lattice laser printed on a surface of thin gold film that allows to control the near- and mid-IR radiation properties of capping layer of mercury telluride (HgTe) QDs.

The near- and mid-IR spectral range is extremely promising for the implementation of optical telecommunication devices, detectors, and emitters, as well as sensor and next-generation security systems. Recently developed semiconductor QDs represent promising nanomaterials emitting light exactly in this range. However, the main issue is associated with fundamental physical limitations (the Fermi golden rule, Auger recombination, etc.) dramatically decreasing intensity of the IR-emitting QDs.

Scientists from FEFU, and Institute of Automation and Control Processes (IACP FEB RAS) together with foreign colleagues for the first time overcame this limitation by applying a special resonant lattice of nanostructures. Scientists formed the lattice by ultra-precise direct laser printing on the surface of a thin film of gold.

“The plasmon lattice we developed consists of millions of nanostructures arranged on the gold film surface. We produced such lattice using advanced direct laser processing. This fabrication technology is inexpensive comparing to existing commercial lithography-based methods, easily up-scalable, and allows facile fabrication of nanostructures over cm-scale areas. This opens up prospects for applying the developed approach to design new optical telecommunication devices, detectors, and emitters, including the first IR-emitting QD-based microlaser.” – said the author of the work, Aleksander Kuchmizhak, a researcher at the FEFU Center for Virtual and Augmented Reality.

The scientist explains that the resonant lattice converts the pump radiation into a special type of electromagnetic waves referred to as surface plasmons. Such waves, propagating over the surface of the patterned gold film within the capping layer of QDs, provide their efficient excitation boosting photoluminescence yield.

“For the visible spectral range, quantum dots have been synthesizing for several decades. Just a few scientific groups in the world, though, are capable of synthesizing QDs for the near and mid-IR range. Thanks to the plasmon lattice we developed, which consists of plasmon nanostructures arranged in a special way, we are able to control the main light-emitting characteristics of such unique QDs, for example, by repeatedly increasing the intensity and photoluminescence lifetime, reducing the efficiency of non-radiative recombinations, as well as by tailoring and improving emission spectrum.” Said Alexander Sergeev, a senior researcher at IACP FEB RAS.

The scientist noted that quantum dots are a promising class of luminophores. They synthesized by a simple and cost-effective chemical method, this material is durable and unlike organic molecules does not suffer from degradation.

The study supported by grants from the Russian Science Foundation (No. 17-19-01325), the Center for Functional Photonics, City University of Hong Kong, and the Innovation and Technology Commission of the Government of Hong Kong (No. ITS / 402/17). https://www.nature.com/articles/s41377-020-0247-6