“Electricity as a raw material” at ACHEMA 2018: Green energy for sustainable chemistry 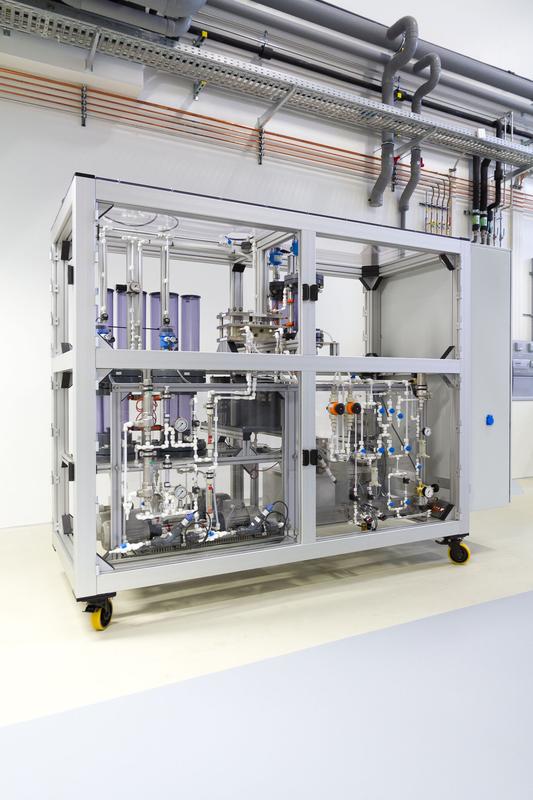 Demonstrator for the production of ethene from CO2. Fraunhofer IGB

Hydrogen peroxide, ethene, alcohols: The Fraunhofer lighthouse project “Electricity as a raw material” is developing electrochemical processes that use renewable electricity to synthesize basic chemicals – with the aim of making the chemical industry more sustainable.

From June 11 to 15, Fraunhofer UMSICHT will be presenting the results together with eight other Fraunhofer Institutes at ACHEMA 2018.

The energy transition makes it possible to generate electricity with lower CO2 emissions and opens up new possibilities for electricity-driven production. To shape this change, nine Fraunhofer institutes have bundled their expertise under the leadership of Fraunhofer UMSICHT. In the lighthouse project “Electricity as raw material”, they are developing new electrochemical processes for the production of basic chemicals.

Since the start of the project in 2015, new processes have been developed, technically demonstrated and their coupling with the German energy system has been analyzed – always with the aim of saving resources, energy and money in the best possible way. At ACHEMA 2018, the leading international trade show for the process industries, the partners present know-how, technologies and demonstrators from the lighthouse project.

Hydrogen peroxide on demand: With electricity to H2O2

The environmentally-friendly chemical hydrogen peroxide (H2O2) is used for a variety of purposes, including as a bleaching agent and for desulfurization. The production is costly and requires large amounts of solvents and energy. For many users, it would be very advantageous to be able to dispense with elaborate logistics and storage and to be able to produce H2O2 decentrally on demand.

In the lighthouse project, Fraunhofer researchers therefore developed a demonstrator for the continuous, electrochemical production of H2O2 in an aqueous reaction system, including coupling to subsequent chemical processes. The process can be small scale, decentralized and ideally performed with 100 percent renewable electricity; the process scheme will be shown at the booth.

Carbon dioxide is a useful source of carbon for chemicals and fuels if renewable energy is used for activation. This way, electricity, CO2 and water become raw materials for a novel CO2 refinery. Several processes for the electrochemical conversion of CO2 to basic chemicals are being developed in the lighthouse project.

With electricity to ethene or alcohol

For instance, the production of ethene, by far the most important basic chemical in the petrochemical industry, from CO2 and water could be demonstrated in just a single step. The 3 m wide and 2 m high demonstrator can be viewed at the exhibition booth.

Additionally, a process for the electrochemical production of short-chain alcohols (C1–C4) is being explored, which converts CO2 and water via a new single-stage highpressure electrolysis process. Short-chain alcohols include for instance methanol. Fraunhofer UMSICHT demonstrates the principle of high-pressure electrolysis at ACHEMA on the basis of a replica high-pressure cell with integrated electrodes.

Long-chain alcohols (C4–C20) are used in a variety of fields, including in the production of plastics, cosmetics and detergents. In order to obtain the expensive raw materials, Fraunhofer researchers have developed a coupled process of high-temperature electrolysis and Fischer-Tropsch synthesis, which produces long-chain alcohols from CO2 and water. The synthesis is realized for the first time via a two-step process. A high-temperature stable solid oxide cell for power-to-gas processes and a plexiglas reactor demonstrate the principle behind the chemical processes at ACHEMA.

From the molecule to the process

Membranes, electrodes and sophisticated analytics are important tools in electro-chemical cells and processes. One of these newly developed tools will be presented at ACHEMA: A novel membrane for divided electrochemical cells, which, apart from the very good proton conductivity, is characterized by a lower price and improved recyclability.

Furthermore, modeling tools and a decision support system have been designed to support each process. The researchers demonstrate how the interactive tool for multidimensional data sets visualizes results and controls electrochemical processes depending on the energy market.

The leading trade show for the process industries will take place from June 11 to 15 2018 in Frankfurt am Main. Fraunhofer UMSICHT will be at the show in hall 9.2, booth no. D66 (joint booth of the Fraunhofer-Gesellschaft).

A special day is June 14 2018, on which a lecture session on the lighthouse project will be held from 3 pm onwards. Further information: http://s.fhg.de/usg