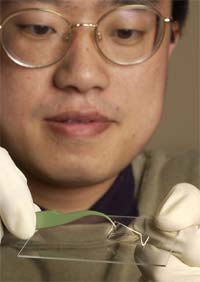 “This development democratizes the preparation of microfluidic biochips,” said Michael Ladisch, Distinguished Professor of Agricultural and Biological Engineering and Biomedical Engineering. “This brings the design and manufacture of these devices within reach of scientists in many laboratories who can now easily test their ideas and conduct research within a typical laboratory setting.”

Microfluidics is a branch of nanotechnology that involves manipulating minute quantities of liquids, typically in a chip device approximately the size of a postage stamp. The initial design and manufacture of these chips often requires weeks of work, but the new approach developed by Ladisch and Tom Huang, a graduate student in chemical engineering, cuts that time to hours.

Microchips have traditionally been made through a lengthy and expensive process called photolithography, which uses X-rays or ultraviolet light to form a pattern on a glass or silicon wafer that is then etched by washing the wafer with a variety of solvents. The key to controlling the shape and size of the patterns on the wafer is the production of a template, which can take weeks to develop.

Ladisch and his team have developed an alternative method that uses materials easily acquired by any research laboratory, including glass microscope slides, tweezers, thin glass fibers such as those found in glass wall insulation, and a flexible polymer called PDMS that is available from most scientific supply companies.

“What we’ve done is really thinking outside of the box,” said Nate Mosier, an assistant professor of agricultural and biological engineering who also contributed to this project. “This is a radical departure from using photolithography to make these devices.”

The speed and simplicity of Ladisch’s method gives researchers the flexibility to experiment with the conception and construction of microchips that can test any number of ideas.

“This whole device can be developed and in operation in less than two hours,” Ladisch said. “Tools like this that take a lot less time to make and that can be manufactured in any lab are going to speed up the rate of research.”

Mosier said, “The capability for rapid prototyping and working out design considerations before the manufacturing step is important to any development, from the micro-scale on up.

“It’s always very difficult to the make the first of anything — the second through the millionth are much easier.”

The new chip assembly method involves placing a fine fiber – approximately one-tenth the width of a human hair – on a glass slide and covering it with a small square of the polymer PDMS. The polymer flexes slightly over the fiber, creating a small channel on either side of the fiber, much the same way that a sheet of plastic wrap placed on top of a pencil would bend, making two channels running the pencil’s length.

A small amount of pressure applied with a finger is enough to cause the PDMS to stick to the glass slide, Mosier said.

“The chemical properties of the PDMS allow it to stick to the glass slide with enough strength to form a tight seal, which permits us to pump liquids through the channel,” Ladisch said.

In addition, he said, the small size of the channel – not quite the width of a strand of hair – allows researchers to minimize their use of experimental liquids, which may be costly or difficult to obtain.

In their proof-of-concept paper, published in the November issue of the American Institute of Chemical Engineers Journal, the team showed that coating the fibers with materials that attract different types of molecules allowed them to separate specific proteins from a mixed solution.

By manipulating the fiber’s properties, scientists can identify or separate various types of molecules, such as proteins or antibodies, from solutions pumped through the chip.

“We can control the chemistry inside the channel to determine what flows through, what sticks, and in that way we can separate things out,” Huang said.

This ability translates into numerous potential applications, such as the ability to diagnose diseases or detect foodborne pathogens and biological agents.

“These kinds of chips are essential from a security perspective,” said Bob Armstrong, senior research fellow at the National Defense University, one of the organizations that funded this research.

“Microfluidic chips are becoming part of a sensor system to detect, for example, biological or chemical agents, or pathogens in the food supply. What is it you want to detect? Your imagination is the only limit on how to use these devices.”

The research is part of an ongoing project sponsored through the Purdue Center for Food Safety Engineering and the Purdue Laboratory of Renewable Resources Engineering. Funding was provided by the Agricultural Research Service of the U.S. Department of Agriculture, and the Center for Technology and National Security Policy at the National Defense University in Washington, D.C., is contributing to the further development of this concept.