Home / Process Engineering / Beetles could prove a hit with the aircraft industry
08.12.2003

Beetles could prove a hit with the aircraft industry 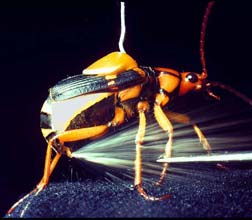 The bombardier beetle’s unique natural combustion technique is being studied to see if it can be copied for use in the aircraft industry.

Scientists studying the bombardier beetle’s jet-based defence mechanism hope it will help to solve a problem that can occasionally occur at high altitude – re-igniting a gas turbine aircraft engine which has cut out, when the outside air temperature is as low as minus 50 degrees Centigrade!

Due to start early next year, this innovative 3-year project at the University of Leeds is being funded by the Engineering and Physical Sciences Research Council (EPSRC).

The project will involve computer-based numerical and mathematical modelling. Initially it will focus on understanding the beetle’s heart-shaped miniature combustion chamber, which is less than 1 millimetre long. Simulations for a larger chamber around a few centimetres long will then be conducted, in which gases are ignited by raising the chamber’s surface temperature. The effect of different shaped nozzle outlets and explosion chambers will also be examined.

The project team will be led by Andy McIntosh, Professor of Thermodynamics and Combustion Theory at the Energy and Resources Research Institute in the University of Leeds. Professor McIntosh says: “The bombardier beetle’s defence mechanism represents a very effective natural form of combustion. Copying such natural mechanisms is part of the growing field of biomimetics where scientists learn much from intricate design features already in nature. Understanding this beetle better could lead to significant advances in combustion research.”