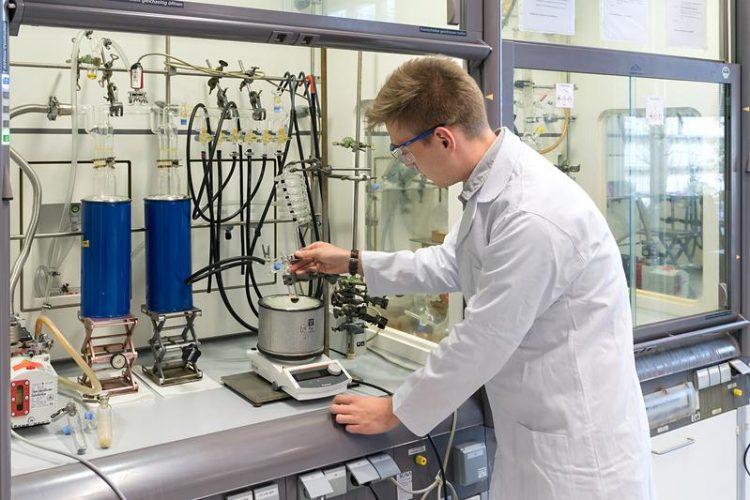 Today, the best silicon solar cells in the world have an efficiency of 24 percent. The theoretical limit is around 29 percent. “This is because silicon normally crystallizes in a diamond structure which provides only an indirect band gap,” explains Thomas Fässler, Professor of Inorganic Chemistry with Focus on New Materials at the Technical University of Munich.

Researchers thus dream of materials in which silicon atoms are arranged in a manner that creates a direct band gap that they can exploit for solar energy production. The scientists view these small silicon clusters as model compounds for this purpose because the atoms can be arranged differently than in crystalline silicon.

“These kinds of compounds are also interesting for a variety of other chemical experiments,” says Professor Fässler. “Using only a few synthesis steps we can now join four and nine silicon atoms into tetrahedrons or near-spherical structures. However, in the past, the synthesis and isolation of the atomic clusters was very laborious. Now, we have taken a significant step forward.”

A cluster of nine silicon atoms

Fusing potassium and silicon results in a compound with 12 potassium and 17 silicon atoms, a gray powder. First author Lorenz Schiegerl managed to stabilize the soluble, nine-atom clusters in liquid ammonia using a clever trick: He added an organic molecule to the ammonia that encapsulates the potassium atoms.

“This simple synthesis, starting from elemental silicon, opens the door to myriad chemical experiments with these clusters,” says Professor Fässler. “In the solvent pyridine, for example, the cluster is stabilized by two hydrogen atoms, similar to the presumed intermediates in large-scale production of polycrystalline silicon, which is prepared using silanes or chlorosilanes for commercially available solar cell modules.”

Particularly promising is another reaction path to obtaining compounds made of silicon clusters. Here, three of the nine silicon atoms combine with molecules that in turn contain silicon or, for example, carbon or tin. Clusters with the highest currently known silicon concentrations are found in these reddish-brown solutions. This opens up novel possibilities for depositing silicon with modified structures out of solution.

“Extending this line of thinking, it should also be possible to build larger silicon structures using clusters of clusters. That would nearly close the gap to the aspirations of theoreticians,” says Prof. Fässler. “In any case, we have opened the door to fascinating, new chemistry.”

The project was funded by WACKER Chemie AG as part of the “WACKER Institute for Silicon Chemistry” at TUM, the Bavarian research association “Solar Technologies Go Hybrid” and the Academy of Finland. The electron structure calculations were done by the team of Prof. Karttunen, Aalto University, Helsinki (Finland) at the Finnish IT Center for Science (CSC).