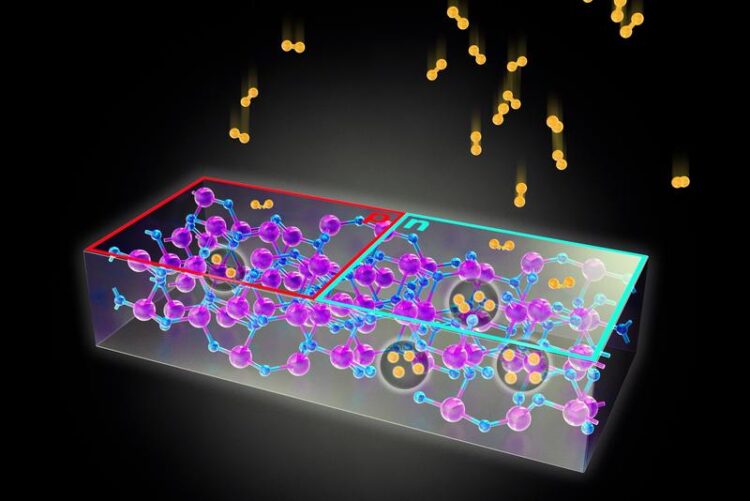 The incorporation of hydrogen into gallium oxide can be controlled in such a way that specific areas with n- and p-conductors are created.
Image: HZDR/Juniks

New approach facilitates the control of reversible conductivity in semiconductors.

The semiconductor gallium oxide is thought to be a promising candidate for potential use in power electronics. So far, however, a number of obstacles have stood in its path, especially how to specifically influence the material’s electrical conductivity. In a study published in the journal Scientific Reports (DOI: 10.1038/s41598-020-62948-2), a team of researchers involving scientists from the Helmholtz Zentrum Dresden-Rossendorf (HZDR) have now demonstrated how the conductivity of gallium oxide in its most stable form (β-Ga2O3) can be regulated via the controlled incorporation of hydrogen in the semiconductor’s crystal lattice.

For the team from Bowling Green (Ohio), Dresden, Berkeley and Los Alamos the starting point for their activities was one of the material’s particularly striking properties: the width of its band gap, which is a measure of the energetic distance between valence band and conduction band in a solid. In semiconductors at very low temperatures, it is only the valence band that initially exhibits load carriers: the material is non-conductive. By inputting energy, however, they can be transferred to the conduction band, enabling a flow of current.

“Experts describe the gallium oxide band gap as ultrawide,” explains Dr. Andreas Wagner, head of HZDR’s Nuclear Physics Division and co-author of the study. “It makes the material particularly attractive for power electronics because it promises applications in the range of high electrical field strengths which would inevitably destroy today’s established semiconductors.” But there is a catch: increasing band gap energy leads to a decrease in the efficiency of the usual doping techniques.

Soft doping
This is a process whereby foreign atoms are incorporated into semiconductors to release additional load carriers in the conduction band. When using electrons, scientists call it n-doping or negative-doping which then leads to n- or p-conductivity. However, incorporating foreign atoms introduces new energy levels into the band gap which can impact the material’s band structure and seriously alter the semiconductor’s electronic properties. Doping using hydrogen is a different matter: the electronic properties of the original semiconductors remain practically unchanged – merely the concentration of load carriers is increased.

The scientists’ research findings demonstrate a new way of establishing gallium oxide as the source material for bipolar transistors. In these classic semiconductor components, n- and p-doped layers are combined so that a greater flow of current can be controlled with the aid of a small control current. They can be used in amplifiers and switches. In order to produce the two layers, two different materials are usually combined. The trick here is that the scientists can achieve the same result in one single material by incorporating the hydrogen.

Hydrogen: an adjusting screw
What the researchers do is to store hydrogen in the gallium oxide’s crystal lattice. Quantum chemical calculations have shown that the hydrogen molecules on the surface of the gallium oxide initially break up into electrically charged hydrogen fragments which are absorbed on the surface. At high temperatures they diffuse in the crystal and occupy the impurities. These are the places in the crystal lattice where the gallium and oxygen ions in the semiconducting material should be found. But they are missing: instead, the existing gaps are positively or negatively charged depending on the nature of the missing building blocks – which makes them of interest to the hydrogen fragments that are also charged.

“We were able to demonstrate that this does not only allow us to change the extent of conductivity but its very nature. Incorporating just a little hydrogen makes the material behave like a p-doped semiconductor while adding more hydrogen causes it to switch to the n-conduction mode,” says Andreas Wagner, summarizing the research findings.

Among other things, the scientists now expect a drastic reduction in energy consumption and manufacturing costs in the production of components for power electronics and optoelectronics. The main problem so far was to move the gallium oxide to p-conduction as well as n-conduction – thanks to their hydrogen method, researchers have now reached this interim goal.