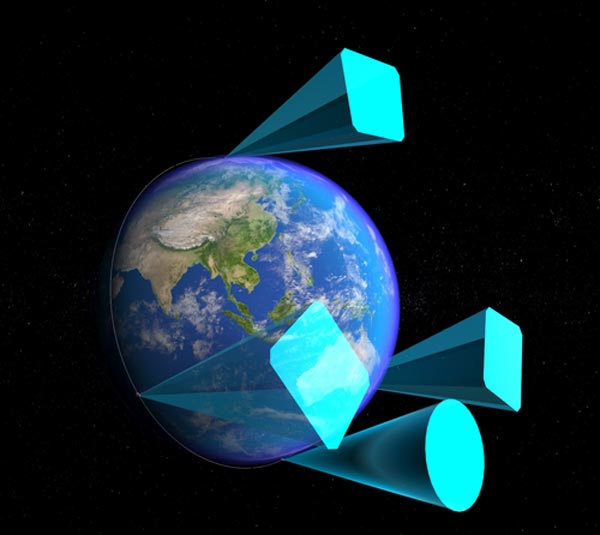 On July 23, 2021, the SwRI-led PUNCH mission passed its latest mission review and moved into the final phase of mission design and instrument fabrication. This image illustrates how the four PUNCH satellites will spread out around Earth along the day-night line to create a complete view of the corona and solar wind. Three of the PUNCH satellites will carry identical Wide Field Imagers, and one will carry the Narrow Field Imager.
Credit: SWRI

NASA mission will study the creation of the solar wind.

On July 23, 2021, the Polarimeter to UNify the Corona and Heliosphere (PUNCH) mission achieved an important milestone, passing its latest NASA review and entering the final mission design phase with a new launch-readiness target of October 2023. Southwest Research Institute is leading PUNCH, a NASA Small Explorer (SMEX) mission that will integrate understanding of the Sun’s corona, the outer atmosphere visible during total solar eclipses, with the “solar wind” that fills the solar system.

“With PUNCH we will finally be able to see directly the connection between the star at the center of our solar system, and the solar wind that immerses our planet and gives rise to space weather here on Earth,” says SwRI’s Dr. Craig DeForest, the mission’s principal investigator. “To do that, we are building satellites and four cameras to photograph very faint rays of sunlight reflected by free electrons in interplanetary space.”

PUNCH consists of four, suitcase-sized, Earth-orbiting satellites that will study the Sun’s outer atmosphere, the corona, and how the corona accelerates to become the solar wind that fills the solar system. PUNCH images will offer unprecedented detail, providing measurements that will bridge a long-standing gap between remote images of the corona and solar wind and direct in situ measurements of the solar wind. PUNCH will also provide ground-breaking 3D information about this region by taking advantage of the way light scatters off electrons.

PUNCH data will allow scientists to answer questions about how the Sun’s atmosphere becomes the solar wind, as well as how structures in the solar wind are created and how large magnetic explosions called coronal mass ejections propagate through the solar system. Such information can shed new light on how the Sun drives a vast system of space weather across the solar system, which can affect astronauts and technology on Earth and in space.

The review, Key Decision Point C, evaluated the mission’s preliminary design and program plan to achieve launch by its target date. With the successful review, PUNCH now moves into the final phase of mission design and instrument fabrication. The four spacecraft will then go through final assembly and testing before their launch-readiness target in October 2023.

The four PUNCH satellites will spread out around Earth along the day-night line to create a complete view of the corona and solar wind. One satellite carries a coronagraph, the Narrow Field Imager, that images the Sun’s corona continuously. The other three each carry SwRI-developed Wide Field Imagers, optimized to study the solar wind. These four instruments work together to form a field of view large enough to capture a quarter of the sky, centered on the Sun. All four cameras will be synchronized in flight, allowing the mission science team to combine their images seamlessly into a single, large field of view.

PUNCH is led by Southwest Research Institute’s Boulder, Colorado, office. The mission is managed by Explorers Program Office at NASA’s Goddard Space Flight Center in Greenbelt, Maryland, which is managed by Goddard for NASA’s Science Mission Directorate in Washington, D.C. Southwest Research Institute will build the Wide Field Imagers and will build and operate PUNCH. The Naval Research Laboratory in Washington will build the Narrow Field Imagers and provide optical testing. RAL Space in the United Kingdom will provide detectors and calibration for the mission.