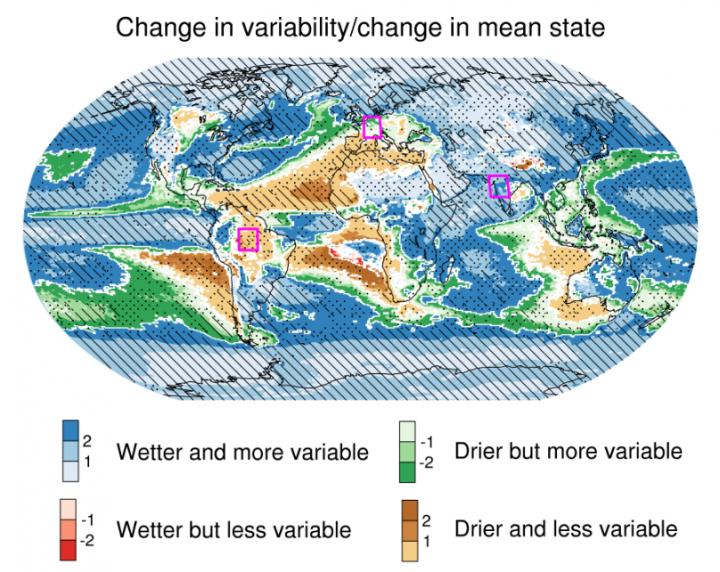 Climate models predict that rainfall variability over wet regions globally will be greatly enhanced by global warming, causing wide swings between dry and wet conditions, according to a joint study by the Institute of Atmospheric Physics (IAP) of the Chinese Academy of Sciences (CAS) and the Met Office, the UK’s national meteorological service.

This study was published in Science Advances on July 28th 2021.

Rainfall plays an important part of our daily life. More leads to floods, less to drought. It has been realized decades earlier that global warming drives increased rainfall on average. How this increase is delivered in time matters enormously. A 2-3% increase of annual precipitation uniformly spreading out of the year does not mean much, but if it falls out in a week or a day, it will cause havoc.

Using large ensembles of state-of-the-art climate model simulations, this study highlights the increase in rainfall variability across a range of time scales from daily to multiyear. Scientists have found that in a future warming world, climatologically wet regions (including the tropics, monsoon regions and mid- to high-latitudes) will not only get wetter on average, but also swing widely between wet and dry conditions.

“As climate warms, climatologically wet regions will generally get wetter and dry regions get drier. Such a global pattern of mean rainfall change is often described as ‘wet-get-wetter’. By analogy, the global pattern of rainfall variability change features a ‘wet-get-more variable’ paradigm. Moreover, the global mean increase in rainfall variability is more than twice as fast as the increase in mean rainfall in a percentage sense,” said ZHOU Tianjun, corresponding author of the study. ZHOU is a senior scientist at IAP. He is also a professor at the University of Chinese Academy of Sciences.

By considering changes in both the mean state and variability of precipitation, the research provides a new perspective for interpreting future precipitation change regimes. “Around two-thirds of land will face a ‘wetter and more variable’ hydroclimate, while the remaining land regions are projected to become ‘drier but more variable’ or ‘drier and less variable’. This classification of different precipitation change regimes is valuable for regional adaptation planning,” said ZHANG Wenxia, lead author of the study.

“The globally amplified rainfall variability manifests the fact that global warming is making our climate more uneven—more extreme in both wet and dry conditions, with wider and probably more rapid transitions between them,” said Kalli Furtado, Expert Scientist at the Met Office and second author of the study. “The more variable rainfall events could further translate into impacts on crop yields and river flows, challenging the existing climate resilience of infrastructures, human society and ecosystems. This makes climate change adaptation more difficult.”