Quantum dots deliver photons one at a time 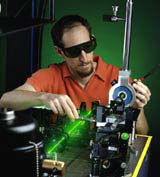 A National Institute of Standards and Technology (NIST) scientist has demonstrated efficient production of single photons—the smallest pulses of light—at the highest temperatures reported for the photon source used. The advance is a step toward practical, ultrasecure quantum communications, as well as useful for certain types of metrology. The results are reported in the Feb. 23 issue of Applied Physics Letters.

“Single photon turnstiles” are being hotly pursued for quantum communications and cryptography, which involve using streams of individual photons in different quantum states to transmit encoded information. Due to the peculiarities of quantum mechanics, such transmissions could not be intercepted without being altered, thus ensuring that eavesdropping would be detected.

The photon source used in the NIST study was a “quantum dot,” 10 to 20 nanometers wide, made of semiconductor materials. Quantum dots have special electronic properties that, when excited, cause the emission of light at a single wavelength that depends on dot size. An infrared laser tuned to a particular wavelength and intensity was used to excite the quantum dot, which produced photons one by one more than 91 percent of the time at temperatures close to absolute zero (5 K or about minus 459 degrees F) and continued to work at 53 percent efficiency at 120 K (minus 243 degrees F). Higher operating temperatures are preferable from a cost standpoint, because the need for cooling is reduced.

The NIST quantum dots are made of indium gallium arsenide, can be fabricated easily, and can be integrated with microcavities, which increase photon capture efficiency. According to NIST electrical engineer Richard Mirin, this design offers advantages over other single photon sources, many of which exhibit blinking, stop working under prolonged exposure to light or are difficult to fabricate.